Home Community Analysis What the Arctic reveals about coronavirus

A little over a century ago, the “Spanish” flu spread around the world with an astounding speed as millions returned home from the battlegrounds of World War I. (While the virus likely did not actually originate in Spain, the neutral country’s media was the only one within Europe to cover its outbreak sufficiently, as other countries censored reports). Many young men who had survived gruelling trench warfare succumbed to pulmonary hemorrhage, edema, and other respiratory infections caused by a deadly strain of the H1N1 influenza virus. Between 1918 and 1920, it infected 25 percent of the world’s population, killing between 17 million and 50 million people. Unusually — and unlike with the COVID-19 virus currently ravaging the planet — young people were hit hard particularly hard.

As travelers wound their way home, the virus penetrated distant corners of the Earth like the Pacific Islands and the Arctic. In October 1918, seven men aged between 18 and 29 sailed 1000 kilometers north from Norway for new jobs in Svalbard’s coal mines. During that fateful voyage, they contracted the Spanish flu. Knocked dead by the virus, the men were interred beneath the permafrost in glaciated Svalbard.

Exactly one month later in Alaska’s Seward Peninsula, Spanish influenza was reported as “cutting out a fearful swath of death…and now, believed at the turning point in this section, is spreading still farther northward towards the Arctic, and down the coast.” 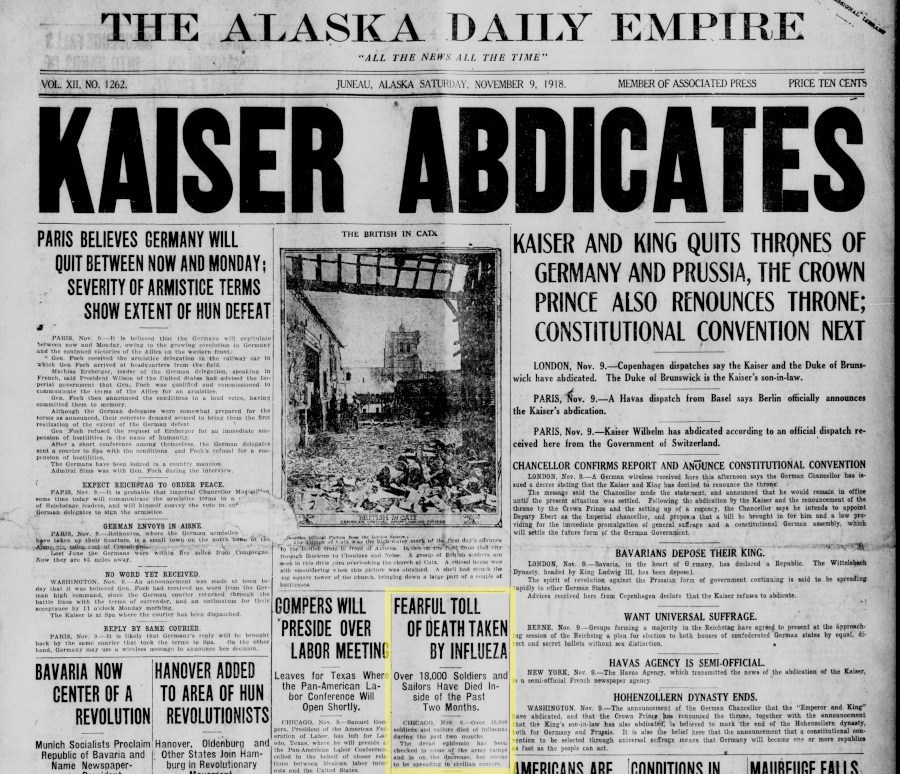 The virus hit Native communities hard. Outside the gold mining town of Nome, the Alaska Daily Empire reported in November 1918 that out of 250 Iñupiat in the vicinity, only 75 were left, with “others dying daily.” Underscoring the disturbingly unequal mortality rate of the disease between Natives and Whites, the same article reported, “Nineteen white persons in Nome have succumbed, but conditions among the whites are improving.” While government authorities made efforts to help the Natives, setting up orphanages and sending dog teams and medical care, for instance, their vulnerability to the virus was exacerbated by the conditions of forced settlements, which were often overcrowded and unhygienic, and the deeper traumas of colonialism. Across the state, children were left orphaned, their parents taken by a flu that originated continents away. Given the stark differences in health and quality of life outcomes between Native and White communities that persist to this day, it is likely that coronavirus will have highly unequal impacts on the two demographics as well.

Unearthing the 1918 influenza from permafrost

In the village of Brevig Mission (then called Teller Mission) north of Nome, the Spanish flu killed 75 out of 80 residents in the span of just five days in November 1918. The community had already experienced a difficult year, losing its mission building to a fire that August (a loss which sadly parallels the fire that consumed the school in the village of Kaktovik just last month).

After the horrifyingly swift spate of flu deaths, the Alaska territorial government sent gold miners up from Nome to use steam points to dig a mass grave in the permafrost two meters beneath the surface. One of the flu’s victims laid to rest there was a heavyset Iñupiaq woman. Little did the dead know that one day, one of their frozen lungs would be cut out in a quest to understand exactly why the pandemic was so deadly.

In 1951, Johan Hultin, a young Swedish-American pathologist, traveled to Brevig Mission after learning of the mass grave. Since it had been encased in permafrost for decades, he believed that frozen, infected lung tissue might store intact virus material. Hultin received permission from Elders to exhume some of the bodies, from which lung tissue was obtained. Efforts to revive the virus failed, however, and Hultin gave up on his mission, at least for a while.

In a tale of scientific commitment and perseverance, nearly four decades later at the age of 72, Hultin came across the work of an American virologist named Jeffrey Taubenberger, who was also studying the 1918 influenza. Inspired by his work, Hultin, using $3,200 from his savings account, led a team of pathologists on a return journey to Brevig Mission. A special meeting of the city council agreed to let the grave be reopened. Hultin and his colleagues identified that one of the bodies – that of the obese woman – had enough fat stores to have kept the internal organs from decomposing during brief periods of permafrost thaw, therefore preserving the virus. The scientists biopsied the lung tissue at the site of the grave. With the procured material, they were successfully able to sequence one of the genes in the virus for the first time.

Hultin’s herculean effort was complemented by a team of scientists working on the other side of the Arctic in Svalbard. On an island more famous for storing frozen seeds than frozen viruses, scientists successfully exhumed six of the seven bodies of the would-be young miners after obtaining permission from their families. Their resting places were located one meter beneath the surface with the help of ground penetrating radar, which can peer beneath the Earth’s surface, whether soil or ice. In 2005, using a variety of lung tissue samples including one from the deceased Iñupiaq woman in Brevig Mission, Taubenbeger’s team finally completely sequenced the 1918 influenza virus, determining that it had come from birds.

While the work of these researchers continues to be heralded, especially as the world confronts a new flu epidemic, it is also important to acknowledge the local and Indigenous who make their studies possible. In a 1998 interview, Hultin expressed, “The only sample we (found was) there because the elders of Brevig Mission let me go back into the grave again…They gave us the opportunity to do something good — not just for themselves but for the whole world.”

As Earth warms, viruses will be lost and gained

Scientists were able to uncover the origins of the mysterious 1918 influenza virus thanks to the icy band of permafrost that stretches across the top of the planet. Underlying much of the Arctic, the thick layer of soil that has been frozen for at least two years has kept everything from enormous mammals like wooly mammoths to microscopic particles like viruses locked into the ground. Across the North, however, this permafrost is rapidly thawing, as a recent dataset published by the European Space Agency’s Climate Initiative illustrates.

While the ground beneath the Arctic cracks and melts, viruses long locked into the soil escape. One concern in Russia is anthrax, a highly toxic bacteria endemic to the country and which thrives among its domesticated and wild ungulate populations, namely reindeer, when unvaccinated. In the 1920s, anthrax was so prevalent and so devastating to reindeer on the Yamal Peninsula that it became known nationwide as the “Yamal disease.” Those outbreaks had a fatal echo a century later in August 2016, when a young boy died and twenty people were hospitalized after being exposed to anthrax. It’s believed that, during the hot dry summer of 2016, these infections were caused by the exposure of a reindeer carcass infected 75 years ago.

Permafrost decay can release long hidden diseases and viruses into the environment, threatening the health of both people and animals. The loss of this frozen ground may also cause the loss of information regarding past epidemics that could help us fight present ones or even prevent future ones. Forget trying to resuscitate mammoths: had scientists not had access to the well-preserved bodies at Brevig Mission, society might have an even weaker understanding of the 1918 influenza, whose exact origins and particular deadliness for young people still baffle scientists.

A better grasp of historic flu pandemics can help researchers come to grips with ongoing ones like COVID-19, and those in the future that humanity will undoubtedly face again. Climate change mitigation – particularly keeping permafrost frozen – therefore doesn’t just promise benefits for the environment. Preserving the ice can directly aid epidemiology and public health, too.

A few weeks ago, as I was sitting at my desk in Hong Kong after returning from fieldwork on Alaska’s North Slope, an urgent email popped up in my inbox. A contact in Utqiaġvik, Alaska had gotten in touch to say that at the North Slope Borough Assembly Meeting in late February, someone from the village of Kaktovik had raised the concern that after speaking with me – someone who appeared Chinese – in late January, he felt unwell and developed a cough. I hadn’t been sick at the time and hadn’t traveled to Mainland China, so I at first felt his concern was unwarranted.

Yet upon reflection, given the devastating effects that respiratory diseases have had on Arctic and particularly Native and Indigenous communities in the past, anxieties about coronavirus are understandable. Beginning in the late 1700s, settlers, miners, fur trappers, and other new arrivals to Alaska imported tuberculosis. By the 1930s, Alaska had some of the highest rates of infection the world has ever seen. The deadly bacteria was responsible for some 35% of Native deaths each year, making it the single highest cause of mortality. To this day, Alaska has some of the greatest number of cases of tuberculosis in the United States.

Coronavirus is a global pandemic. The number of infected cases in the Arctic shows that it has already quickly reached the planet’s more remote fringes just as the 1918 influenza did a century prior. Just yesterday, Iceland saw its first person to succumb to coronavirus. It was not an Icelander who died, but, morbidly indicative of the country’s tourism industry, a 36-year-old Australian man.

In light of the dire state of healthcare in many Alaskan villages and in the wider Arctic, it is critical that strict measures are taken to prevent the further spread of coronavirus. Greenland’s decision to suspend all air travel for two weeks both to the country and within it may seem drastic. But in a place without roads and where flying is commonplace (features common across much of the Arctic), restrictions on aviation may be temporarily necessary to curb the virus’ spread.

With the lack of hospitals and clinics in the north, not to mention ventilators, it is already hard enough to control infections and diseases that humans have long known about such as anthrax and tuberculosis. Let us hope that the biological residues of a deadly virus a century ago dug up from the Arctic’s frozen recesses may help inform how we react to the pandemic unfurling today. And while coronavirus seems to be an imminent and pressing danger that makes the threat of climate change seem slow and even inconsequential in comparison, we should not forget that the long game of halting its tide and keeping permafrost frozen may also hold the keys to averting future viral catastrophes.

Mia Bennett is assistant professor of geography at Hong Kong University’s School of Modern Languages and Cultures, and writes at Cryopolitics, where this piece first appeared. It is republished here with permission.