The last-minute decision by President Obama to indefinitely ban any future offshore energy activity in the U.S. Arctic should be reversed by President Trump, soon — within the first 100 days of his term.

Why? Obama’s decision was taken with no public comment or consultation ahead of time. Resources worth more than $1 trillion at today’s low prices were put off limits to human use. Large supplies of natural gas, mankind’s “bridge fuel” to lower-carbon power, including recent discoveries, were locked away — while Russian Arctic gas, much further away from world markets, continues its march toward production. Take away development and the effect is to dampen Arctic research, monitoring and infrastructure development — things we need to establish leadership in this newly accessible ocean.

But there’s one more reason the ban should not stand: It was probably illegal.   The state of Alaska’s equities in law were never met. This can be rectified by court decisions if the state challenges it in court — but America’s energy future is too important to tie up for years in litigation.

Only a few months ago, I — a pro-production, pro-conservation Republican — would have said that President Obama executed an Arctic policy based on balance. I joined an October Atlantic Council conference where a senior White House official publicly noted that “responsibly developing Arctic oil and gas resources aligns with United States’ ‘all-of-the-above’ approach to developing domestic energy resources.”

And yet in the space of eight weeks the White House performed a stunning about-face, first removing the Arctic from the next offshore leasing program, and then delivering the coup-de-grace by killing any prospect of future development. Suddenly the Arctic ecosystem was simply too fragile to even consider domestic energy development, irrespective of past exploration. We had adopted a “drain Russia first” energy policy for the Arctic.

So what changed in the space of those two months? Looking at these decisions, it’s hard to reach any other conclusion than that the White House was reacting to the November election. Under the new reality of President-elect Trump’s stunning victory, the administration decided to toss every land mine it could to slow or prevent oil exploration and production in Arctic waters. It blew up the bridges to the state of Alaska, the Alaska Native community, and to other Arctic nations pursuing offshore development that its own policy had built.

The “leave-it-in-the-ground” crowd had crowded out the “all-of-the-above” policy, and in a manner that was most undemocratic and unfair. Keystone Pipeline got eight years of extended hearings before Obama killed it. Alaskans who had worked out how to explore the Outer Continental Shelf got no public process, not even a tweet. 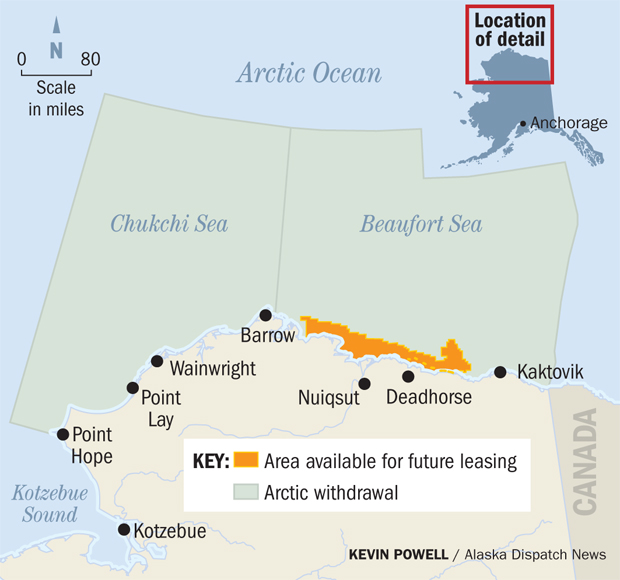 A detailed analysis of the Outer Continental Shelf Lands Act and its previous applications highlights three primary difficulties with the White House’s order; that there’s no precedent to show a ban should be permanent, there is nothing to suggest a subsequent White House cannot overturn the decision, and that the administration’s application of the rule conflicts with previous uses and several of the act’s wider specifications.

The relevant language permitting a moratorium on energy development sits in section 12(a) of the act and states that the president may “withdraw from disposition any of the unleased lands of the outer continental shelf.” Crucially the law never suggests that these withdrawals should be considered “permanent” or “irreversible,” a point the White House tacitly admitted when it termed the decision an “indefinite” action. That argument is corroborated by past applications of the rule, which in each case have included a specified time limit.

Nor is there anything to suggest that a 12(a) ruling will handcuff subsequent administrations. After President George H.W. Bush implemented a ban on Atlantic and Gulf of Mexico waters, President George W. Bush used the rule to remove restrictions, effective immediately on his order. Put simply, precedent suggests that if one president has been able to use an executive memorandum to implement a ban, that president’s successor should be able to use the same authority to repeal the regulation.

Finally there are numerous issues with the way the administration has applied the regulation. According to its text, the act was explicitly designed to ensure that the Outer Continental Shelf is “available for expeditious and orderly development.” Previous restrictions have reflected this point and protected specific, discrete areas of the continental shelf with special characteristics. In contrast the Arctic moratorium covers almost the entire Beaufort and Chukchi seas, a combined area of more than 125 million acres. It is hard to argue that President Obama’s use of the rule fits with Congress’ intent of ensuring access to the continental shelf.

Similarly, the OCSLA also requires that the federal government consult with the governor of any state where restrictions are under consideration. Alaska state officials have already noted that the administration failed to conduct any such discussion with them, a point borne out by Gov. Walker’s comment that the decision “marginalizes the voices of those who call the Arctic home.” I hope Alaska sues. As recent polling has indicated, Alaskans overwhelmingly support offshore energy development in the Arctic, a point the administration appears to have been cognizant off when it neglected to discuss the ban.

President Obama’s decision to implement a ban in the Arctic poses several troubling realities. Any attempt to cut carbon should be applied fairly, with public input, with maintaining American energy independence in mind. Technology development, including finding ways to decarbonize hydrocarbons, is the best approach.

But because the Obama administration appears to have actively chosen to re-interpret the intention and application of the original act, its decision is clearly beyond the scope of executive control. It ignores the spirit of previous rulings, disregards state and regional authority and has no historical parallel. President Trump should overturn it as a priority in his first 100 days in office.

The views expressed here are the writer’s and are not necessarily endorsed by Arctic Now, which welcomes a broad range of viewpoints. To submit a piece for consideration, email commentary (at) arcticnow.com.