LONDON — U.S. sanctions on two units of Chinese shipper COSCO hit the liquefied natural gas (LNG) tanker industry on Monday as U.S.-listed Teekay LNG said its shipping joint venture in Russia had been “blocked” because of its ties to COSCO.

Teekay LNG said on Monday that its 50-50 Yamal LNG Joint Venture had been deemed a “blocked person” under the sanctions because its partner China LNG Shipping (Holding) (CLNG) is 50 percent owned by COSCO Dalian.

“As a result of CLNG’s 50% interest, the Yamal LNG Joint Venture also currently qualifies as a ‘Blocked Person’ under OFAC rules,” Teekay said in a statement, referring to the Executive Office of Foreign Assets Control (OFAC) Order.

“For clarity, the Teekay Group has not traded and will not trade with Iran and will not act in contravention of any trading sanctions,” Teekay said in the statement after postponing its Oct. 2 investor day because of the developments.

The LNG plant, surrounded by thick ice during the winter, is unique in operating in such harsh conditions. The Arc7 tankers take LNG westward to Europe in winter and eastward to Asia in summer when ice along the Northern Sea Route dissipates sufficiently to allow passage.

Teekay said it would hold a conference call Monday evening to discuss the developments.

Yamal has been producing and shipping LNG above its expected capacity of 16.5 million tonnes a year (mtpa), shipping 12.8 mtpa so far this year.

“Everything is going without hindrance,” a source close to Novatek told Reuters when asked about the tankers’ movements. 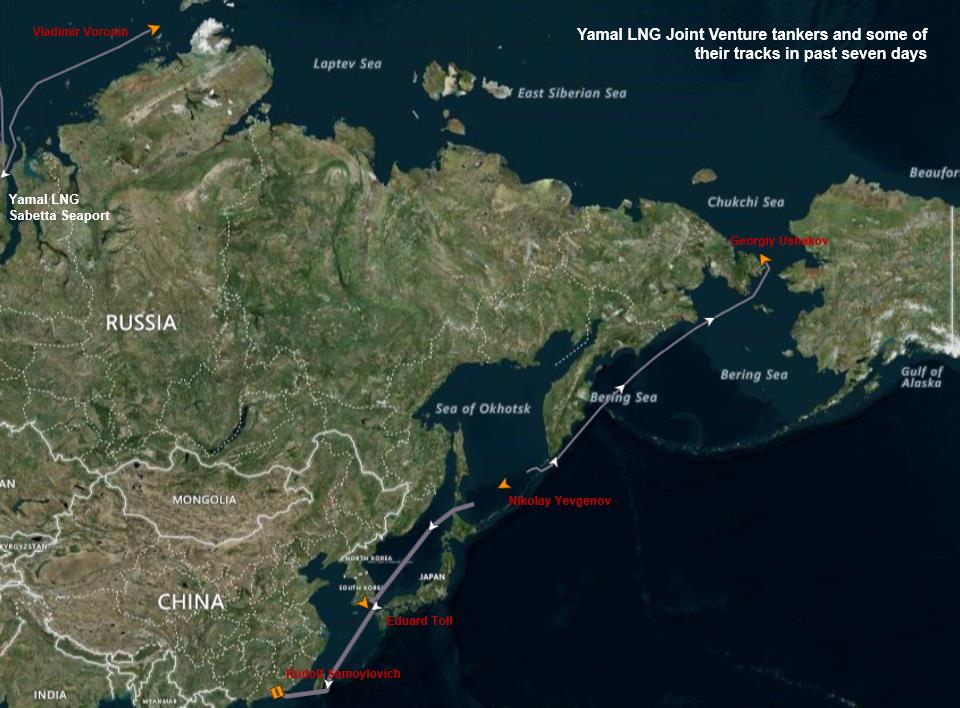 Shipping analysts said LNG freight rates have jumped by between 7 percent and 11 percent in the past week to about $70,000 a day, though rates have been rising gradually in recent weeks as winter demand picks up.

Additional reporting by Ekaterina Kravtsova in London and Vladimir Soldatkin in Moscow.