Say Eurovision to anyone in Europe and they will immediately know what you are talking about. For everyone else, there is nothing you can possibly say that fully conveys what the event entails. (Although The Lawrence Welk Show meets Sabado Gigante meets The X Factor gets you off in the right direction.)

The basic facts are simple enough. Firstly, it is an annual singing competition. (Its full name is the Eurovision Song Contest.) Secondly, while the ‘Euro’ in ‘Eurovision’ clearly refers to Europe, just where Europe ends and Asia and Africa begin is blurry. Armenia, Azerbaijan (the 2011 winner), Russia (2008 winner) and Turkey (2003 winner), for example, take part. Though their inclusion, added through successive expansions, may irk purists, it is at least defensible. Tunisia’s past participation and Australia’s current participation defies all geographic logic. Likewise, this year’s host city is Tel Aviv, an honor earned after last year’s Israeli entry won.

Eurovision’s popularity is even more borderless. It is big in Australia (perhaps part of the reason for its invitation to sing along) and a number of Asian other countries. Its organizers have made push to get the Chinese to love it as boundlessly as Europeans.

As for the performances themselves, they are the most difficult element of all to explain, let alone understand. The basic recipe is as follows: start with a standard pop song, mix in a healthy amount of kitsch, add a dash of inclusiveness (the 2014 winner was a bearded cross-dresser), heap on the pyrotechnics and other special effects and pack it all in gentle nationalism. Prepare for the better part of a year. Serve to an audience of 200 million.

[For one Sámi musician, the yolk is never the same]

Language has always played a big role, too. In the competition’s early years, entries had to be sung in the country’s native language. With the emergence of English as the lingua franca of the entertainment world, this rule has been eliminated (sometimes to the relief of singers otherwise forced to sing in a less mellifluous tongue). Most performers now opt for the internationalized route. The result is a text that more people can understand but is less worth listening to than one cleverly written and confidently sung.

For others, eschewing English is, at least in part, a matter of national or cultural pride. Native speakers of French are known to stick to French. (Céline Dion, a Québécoise, won in 1988 for Switzerland singing ‘Ne partez pas sans moi’.) Spaniards and Italians do too, though to a lesser degree. Others go in the other direction, piling on the languages, in harmony with the Eurovision Song Contest’s message of national co-existence. The Danish entry this year, for example, is sung mostly in English, but it includes verses in French, German and — somewhat rare for a Danish entry — Danish.

To get to the final, the Danish song, like a lot of the other national entries, had to win in a national sing-off. The runner-up was also lesson in multilingualism, including verses in both English, and, even more of a rarity, Greenlandic (which has happened just once before).

Whether singing in several languages is a coincidence or part of an emerging trend towards cultural nativism cannot be known yet, but, even with the Greenlandic entry crashing out, champions of Indigenous groups can already consider 2019 to be something of a high-water mark, exceeding even 2016. That year, a rule change permitted the audience to wave sub-national flags, a decision made to avoid conflict after Britain sent a Welsh singer to the final and Norway sent a Sámi performer.

This year, Norway has done it again. On Saturday, that country’s residents, voting by text message, together with a jury of experts, selected KEiiNO as the winner of Melodi Grand Prix, the national final. But whereas the 2016 performance was sung completely in English, the 2019 entry is partly in Sámi.

This coming Saturday, the Swedes will get their own chance to vote for an Indigenous performer. One of the favourites in the final round of Melodifestivalen is Jon Henrik Fjällgren, a Colombian-born orphan adopted by a Sámi family. While Fjällgren, unlike KEiiNO, will not sing his entry in Sámi (it has so far been sung in Swedish, though the rules permit him to sing an English version in the Eurovision final in May, should he go through) a portion of the song is performed in a joik style, a form of Sámi non-verbal singing. To complete the Sámi connection, he wears a Sámi-inspired disco suit and, at one point, sings to a reindeer that appears on a video screen.

Like most new talents, Fjällgren has been at his trade for a number of years. In 2014, he won Talang Sverige, the Swedish version of the Got Talent talent-competition franchise, with a tear-jerking joik performed in honour of a deceased friend. (Try watching it without getting misty.) He has appeared in Melodifestivalen twice before, placing second in 2015 and third in 2017. A win on Saturday would put him on the same path as the one beaten by ABBA, which, before it was a 1970s supergroup, was the 1974 winner of Melodifestivalen and Eurovison.

Let your fingers do the talking 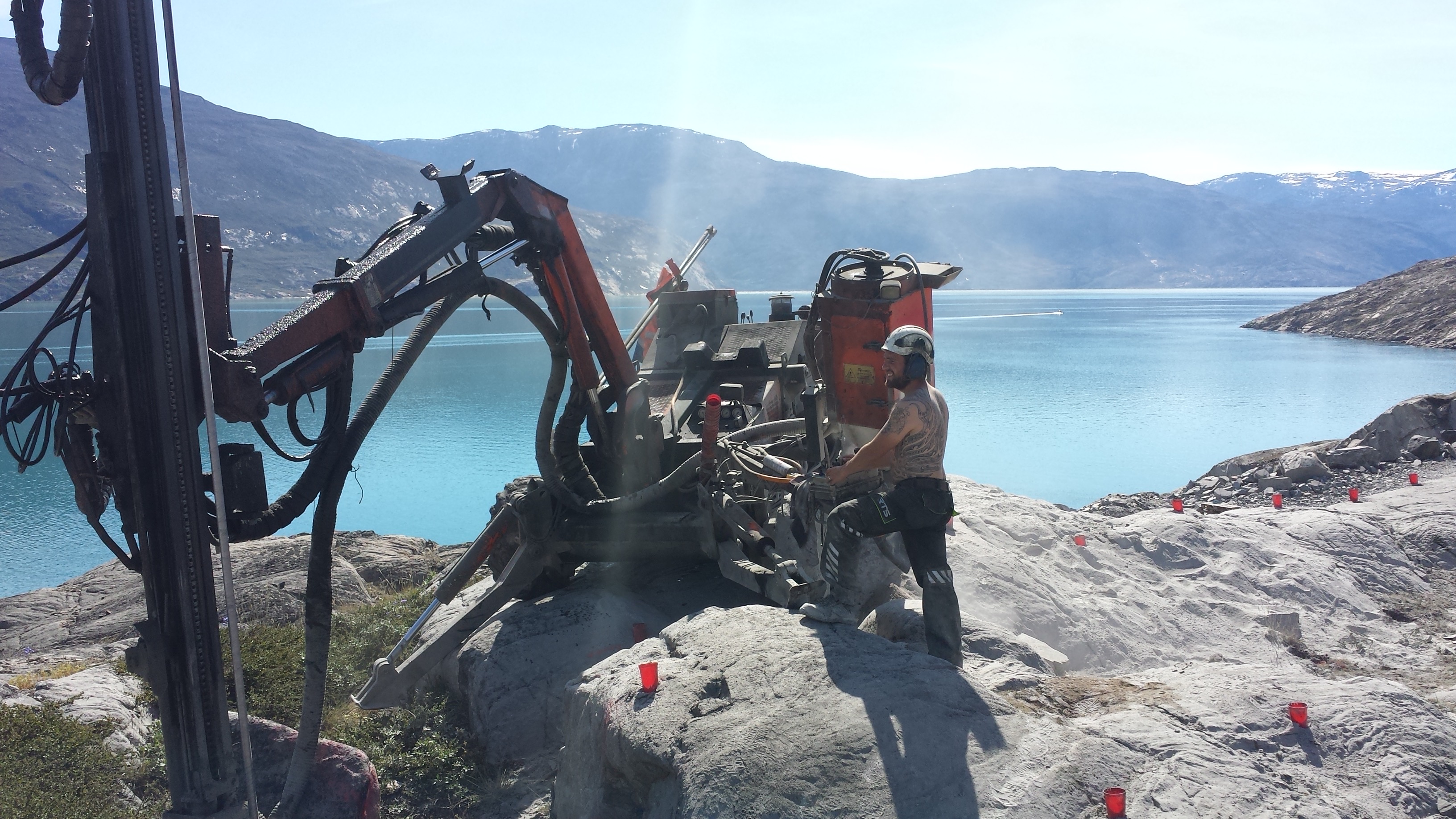 The best thing Prince Frederik, Denmark’s heir apparent, could to do promote Greenland’s mining industry would be to raise a finger at those sceptical of its potential.

No, not that finger. Frederik’s wedding ring (as well as the one worn by his wife) was fashioned, in 2004, from some of the first gold that was produced from the then-newly-operational Nalunaq mine, in southern Greenland. As such, it serves as a symbol of the potential of the country’s mineral wealth. It also a reminder of how much the country has riding on the sector. Nuuk, for example, is hoping that mining will form one of the pillars of a country that is economically (and, eventually, politically) independent from Copenhagen.

Unfortunately, Frederik’s ring is also a reminder of just how arduous a task it will be to accomplish that goal. The mine that produced the gold that went into the rings is no longer in operation. Its closure, in 2013, left the mining sector in a period of complete dormancy that was not broken until 2017, with the opening of the Aappaluttoq ruby mine. A second operation, this one producing anorthosite, came on-line in 2018. More are in the pipeline, though some have been about to enter production for years.

These facts meant that Frederik, and the entourage of Greenlandic officials attending PDAC, a huge mining trade show being held in Toronto this week, were already going to have their work cut out for them to attract investors. Their assignment was made harder last week after the Fraser Institute, a Canadian market-research outfit, published its annual survey of mining companies.

Greenland, which once ranked as high as seventh (in 2013, out of a total of 112 jurisdictions) this year slipped for the third year running, to 63 (out of 83), the worst in Europe. One of the main reasons, according to the Fraser Institute, is a drop in Greenland’s Policy Perception Index, which measures the effects of government policy on attitudes toward investment.

In response, Greenland’s mining officials point out that the Fraser guide is not the be-all and end-all of mining outlooks, and suggest that surveys that rely on objective measurements are more reliable.

“I’m not surprised when someone goes 20 places ahead or back,” Jørgen T. Hammeken-Holm, the deputy minister for mining, told Sermitsiaq, a Greenlandic news outlet. “I find it hard to take a study that is based on subjective criteria very seriously, given its lack of a professional approach.”

Related article
Miners upbeat ahead of Toronto rite of spring

There was a time when food was something you ate. Today, depending on whom you ask, it is an essential element of any one of a number of industries, most notably tourism, but also things like healthcare and research, apparently. To keep track of all the ways that what we eat can be something others can live off, the Sermersooq Business Council, which seeks to promote growth and investment in the region of Greenland that includes Nuuk, has established a ‘food cluster’.

Appetizing as that sounds, it is in fact, a grouping of businesses working in a similar subject area. The benefit of getting everyone to sit around the same table, literally as well as figuratively, the idea goes, is that it spurs innovation, strengthens networks that can lead to commercial partnerships and, ultimately, leads to growth.

This week, Nerisa – Arctic Food Cluster, holds its second meeting of the year. In the group’s own words, the initial goal, in keeping with the food metaphor, is to harvest the low-hanging fruit by making sure local businesses and others who deal professionally with food are not working at cross purposes. From there, it hopes to expand its activities to the national level and, later internationally. Hence the choice of a name that is palatable at home as well as abroad.


CAFF Arctic wetlands workshop
CAFF, an Arctic Council working group, is undertaking an initiative on enhancing engagement in relation to the roles and functions of Arctic wetlands as a resource to support sustainable development and resilience in Arctic biodiversity, ecosystem services, and the livelihood of indigenous and local peoples. The effects of climate change on Arctic wetlands, their biodiversity and functioning are still little understood but can be expected to be considerable.

The Week Ahead is a preview of some of the events related to the region that will be in the news in the coming week. If you have a topic you think ought to be profiled in a coming week, please email [email protected].