Scientists examining satellite images of one of Greenland’s largest glaciers believe they have found an unexpected new crack in its floating ice shelf that could contribute to a dramatic break in coming years.

The Petermann glacier, located in the high Arctic at 80 degrees North latitude, is one of the most important outlets by which the Greenland ice sheet extends and flows into the sea. In 2010 and 2012 (see photo), it lost extremely large pieces, each several times the size of Manhattan, from its ice shelf, which floats on top of the waters of a fjord whose depth exceeds that of the Grand Canyon.

These changes captured the world’s attention – and greatly shrank this floating shelf that stabilizes the glacier by attaching to the walls of the fjord in which it lies. That’s a big deal because Petermann glacier holds back about a foot of potential sea level rise from the Greenland ice sheet.

Since the drama of 2010 and 2012, another large crack has begun to open and stretch towards the center of Petermann’s ice shelf – which suggests the shelf could lose another large “ice island” soon. That’s bad enough, but this week Stef Lhermitte, a researcher at Delft University of Technology in the Netherlands who studies Greenland using satellites, posted images suggesting the development of a second and different sort of crack, one that could potentially link up with the first one. 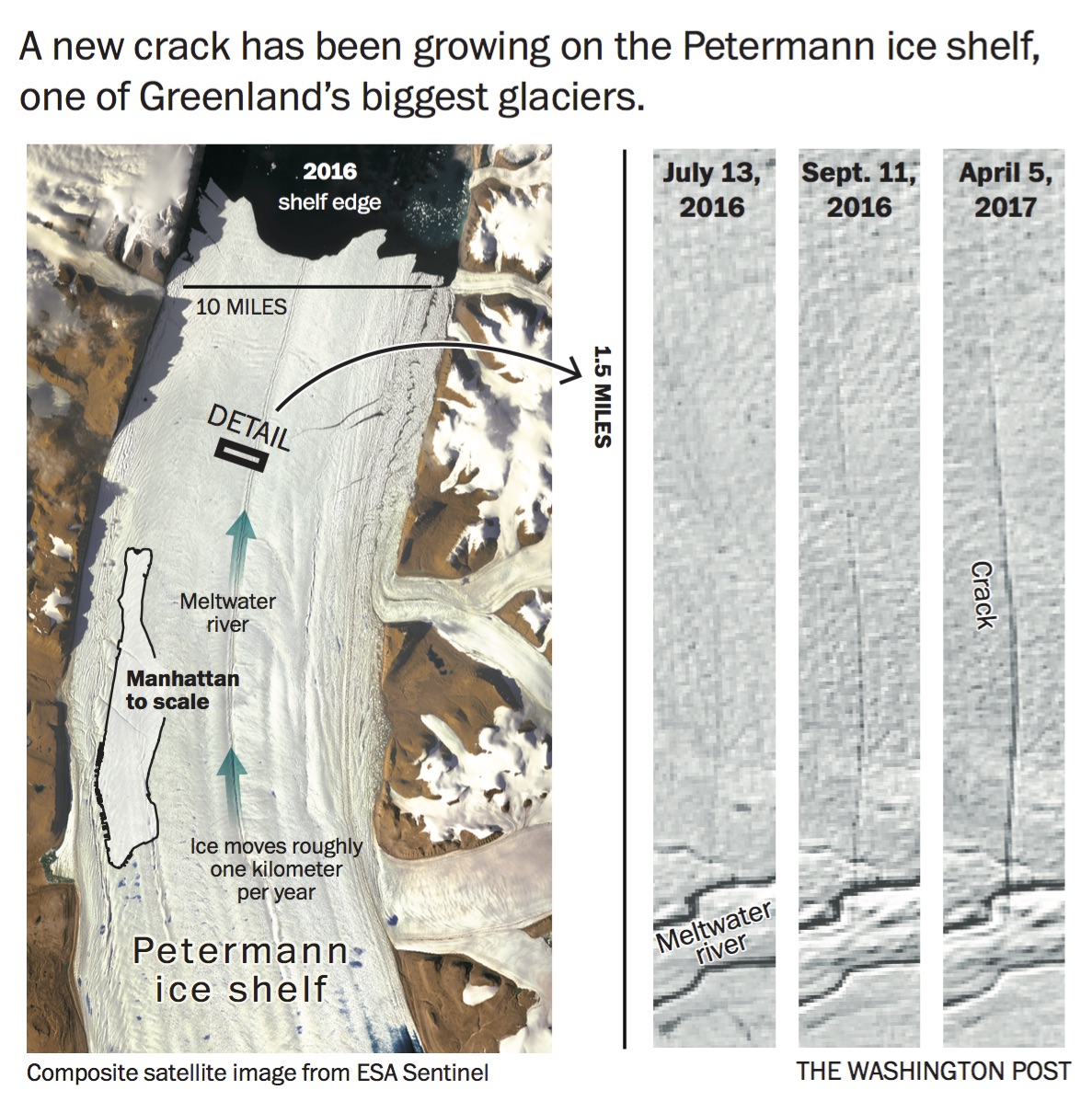 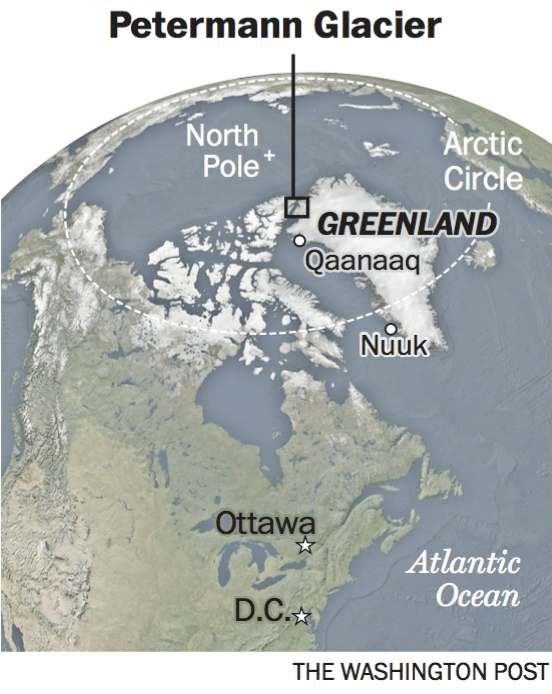 This crack, oddly, appeared to have formed in the middle of the ice shelf, rather than on its side where cracks usually begin. But given its location, it could potentially connect with the pre-existing crack if it continues to grow, extending it across much of the shelf.

Lhermitte told the Post he went back and analyzed past images, which appeared to confirm that the new crack has only begun to form since last summer – in other words, it seems to be a new feature, not visible in 2014 or 2015. But he also cautioned that he’s an expert in satellite observing rather than on Petermann glacier itself, and he could not entirely rule out that the crack had been there before, but had been obscured by snow somehow.

Other researchers who know the glacier seemed to take Lhermitte’s suggestion quite seriously. The Post reached out to four additional researchers or research groups to evaluate the images that Lhermitte posted. While they had a range of reactions, all agreed that the images did appear to show an apparent crack. And a common theme was that it appeared to be unusual and could possibly help precipitate a larger break.

Eric Rignot, a NASA and University of California-Irvine scientist who has studied Petermann up close, commented:

“The ice shelf is slowly but surely falling apart. It has been stable from 1901 till the 2000s, then started to break up, especially in 2010-2012. We have seen the glacier speed up for the first time around 2014-2015. Whether this new crack is significant or not is hard to tell as of now. It is unusual to see cracks forming from the center, they usually start from the sides. This could indicate that the ice shelf has gotten too thin in the middle.”

Jason Box, a professor with the Geological Survey of Denmark and Greenland – who has also visited Petermann and studied it firsthand – was more alarmed. He said that if the glacier breaks here the resulting ice island could be 50 to 70 square miles in size.

“Amazing to see a new crack forming and in a location well upstream of the present day calving front,” said Box, calling it a “prelude to further retreat.”

But Box also added that “It will probably be several years before we see action like in 2010 and 2012.” He also sent data suggesting that Petermann has lost over 100 square miles of ice and over ten miles of length since those events.

Andreas Muenchow, a University of Delaware oceanographer who studies Petermann, said that Lhermitte’s images suggested the possibility of another large breakup in the glacier as soon as this year.

“This could be a big deal that may lead to a third break-up, but it probably will not happen until later this summer,” said Muenchow by email. “The odd thing here is that new crack is (a) on the western side of the central channel and (b) that it originates at the center. This I have not seen in all imagery that I looked up for the period of 1918-present.”

Finally, the Post reached out to Seongsu Jeong and Ian Howat of Ohio State University. They are authors of a recent study of Pine Island Glacier in west Antarctica, which is sometimes compared to Petermann because of its similar configuration, but is considerably larger.

That research found a development of unusual cracks that could be an analogue for the one at Petermann — forming in the center of a floating shelf rather than on its sides, and apparently emerging from below the ice, suggesting they could be impelled by warm ocean waters. The scientists postulated that the ocean was melting rifts below the ice, and then stresses and strains were helping these to widen further over time.

[NASA took on an unprecedented study of Greenland’s melting. Now, the data are coming in.]

Jeong and Howat were also struck by the Petermann images and conducted some additional analysis. They suggested that the new crack may be caused by the larger pre-existing one, which could be exerting additional stress across the shelf. They also suggested that floating sea ice at the front of Petermann glacier is likely keeping the cracks from widening further by holding the shelf in place — but noted that this bracing function will disappear as summer approaches and the sea ice dissipates.

“I’d say that the rifting process is on hiatus right now, but it is very likely that the cracks will continue to grow in this summer,” said Jeong by email.

So in summary — the summer of 2017 could potentially hold some drama at Petermann glacier. No doubt many eyes from the sky will be trained on it very closely.