For the second year in a row in late December and for the second time in as many months, temperatures in the high Arctic will be freakishly high compared to normal.

Computer models project that on Thursday, three days before Christmas, the temperature near the North Pole will be an astronomical 40 to 50 degrees warmer than normal and approaching the melting point of 32 degrees.

The warmth will be drawn into the Arctic by a powerhouse storm east of Greenland. The European weather model estimates its lowest pressure will be around 945 millibars, which is comparable to many category 3 hurricanes.

Maue explained that depleted sea ice cover east of the Nordic Sea helps create a passageway for warm air to surge north uninhibited. “You have more real estate available to advect the warm and moist air northward,” he said.

Arctic sea ice levels are at a record lows. In November, the Arctic usually gains ice, but over a period of five days it saw 19,000 square miles of ice cover vanish, which NOAA called “almost unprecedented.” 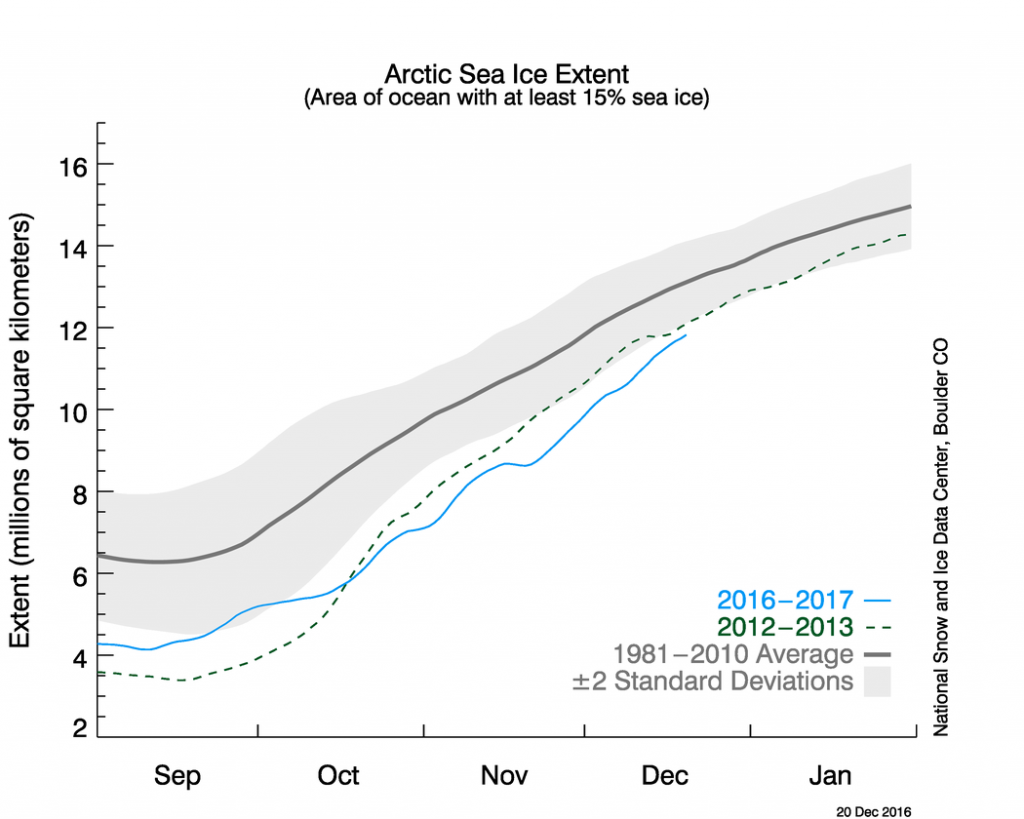 Zachary Labe, a doctoral student researching the Arctic at the University of California-Irvine, said that the lack of ice in this region has allowed ocean temperatures to warm to levels well above normal.

“The warm ocean acts as a buffer to keep the air temperatures from getting colder,” Labe said.

Air temperatures in the Arctic above 80 degrees north latitude have been much warmer than normal since roughly September.

The “persistence and magnitude of above average Arctic temperatures continues to remain quite impressive” Labe said on Twitter.

The month of November was an incredible 18 degrees warmer than normal in the Arctic, the National Snow and Ice Data said.

Richard James, who holds a doctorate in meteorology, found November produced the most anomalously warm Arctic temperatures of any month on record after analyzing data from 19 weather stations.

In the middle of the month, the temperature averaged over the entire Arctic north of 80 degrees latitude spiked to 36 degrees above normal.

Ted Scambos, a scientist at the National Snow and Ice Data Center, said that he was struck that an area “the size of the entire contiguous U.S. had temperatures that far above the norm, all at the same time.”

The anomalous warmth to close out 2016 follows a very a similar event at the end of 2015 when Arctic temperatures surged over the melting point.

[Earth’s temperature will dip but still sizzle in 2017, scientists say]

The question the research community is grappling with is whether these huge temperatures spikes are becoming more common.

“I don’t think anyone can for sure say,” said Labe. “The variability in the Arctic is tremendous. It usually does bring in brief periods of very warm weather [compared to normal].”

WeatherBell’s Maue agreed, saying the big Arctic storms which have drawn mild air into the Arctic both this year and last year are part and parcel of Atlantic weather variability.

A study published in the journal Nature on Dec. 15 said these events have happened once or twice a decade going to back to the 1950s.

[Change in the Arctic this year was unlike any ever seen before, scientists say]

While it’s premature to say if these events are becoming more frequent, the intensity of the warm air reaching the Arctic is almost certainly increasing.

“[T]he warmest midwinter temperatures at the North Pole have been increasing at a rate that is twice as large as that for mean midwinter temperatures at the pole,” the Nature study said. “It is argued that this enhanced trend is consistent with the loss of winter sea ice from the Nordic Seas that moves the reservoir of warm air over this region northwards making it easier for weather systems to transport this heat polewards.”

When these excessive warm anomalies occur in the Arctic, the cold air which is usually present must go somewhere. In November, it piled up in Siberia and that is poised to happen again.

And eventually some of the cold air in Siberia crossed the pole and dived into North America in mid-December. Only time will tell if history is to repeat itself.