The tantalizing news from Caelus Energy of a big oil discovery in Alaska arrived Tuesday as the powerful oil industry girded for another fight in the upcoming legislative session to protect oil-tax benefits provided by the state.

The Dallas company’s claims of a world-class find, spread by a public relations effort, underscores the difficulty Gov. Bill Walker may face in reducing the state’s generous tax benefits.

Caelus’ announcement that it could produce 200,000 barrels of oil daily from remote Smith Bay — figures that currently lack third-party review — follows in the footsteps of another potentially huge discovery on the Colville River being pursued by another independent, Armstrong Oil and Gas.

That project is called Nanushuk or Pikka, and Armstrong says it could produce 120,000 barrels of oil daily.

The two prospects could go a long way in recharging the trans-Alaska pipeline — currently moving about 500,000 barrels daily — and solving a massive fiscal crisis that could soon force Alaska to severely cut government services or crack into the $54 billion Permanent Fund to fund them.

Under the current tax scheme, the fields could cost the state a bundle before production occurs. But the produced oil could be worth much more — billions of dollars over the fields’ lifetimes — creating difficult choices for an administration trying to trim an annual deficit that has reached $3.2 billion.

“Is that money well spent, given the price of gas today? But we do know oil should continue to be a long-term fixture of our economy and the state,” Sullivan said.

The potential benefits of the oil discoveries, including thousands of jobs, give industry supporters ammunition to argue the tax system in place is working, and should only see minor changes, if any.

Caelus executives argued just that in a meeting with reporters on Tuesday. CEO Jim Musselman said the state should do what it can to support small, independent oil companies like Caelus to help diversify North Slope oil production which has long been dominated BP, ExxonMobil and ConocoPhillips.

Pat Foley, senior vice president of the company’s Alaska operations, said changes made by lawmakers and Walker to the oil-production tax system this year have already trimmed the value of the Smith Bay project.

“The value has already eroded,” said Foley. “It can’t erode much more.”

One change placed a seven-year limit on the state’s “new oil” classification — previously there was no time limit. The designation allows companies producing oil from new units to pay no production taxes until oil prices reach $73 a barrel. Oil has hovered around $50 a barrel for about two years.

This past summer, a measure from the governor would have reduced the benefits further. Walker introduced a bill to prevent Slope companies from continuing to receive a tax credit tied to losses that could cost the state hundreds of millions of dollars in the future, potentially offsetting gains from production taxes if oil prices rise.

The bill would have eliminated the credit that commits the state to covering 35 percent of a company’s losses — called the North Slope net-operating loss credit — but the proposal failed.

Musselman said Tuesday if the bill is reintroduced and passed by the Legislature, the Smith Bay project is dead.

“Nothing gets done under 5005,” said Musselman, referring to the Senate bill’s number.

The Pikka project will also die, he said.

“It totally kills your economics,” he said.

Walker said in an interview Wednesday Alaskans can expect him to introduce a bill in the session starting in January to address tax credits paid to the Slope oil industry, following last year’s phase-out of credits centered on the Cook Inlet region.

But just what form the Slope proposal will take, and whether eliminating the 35 percent credit will be in the mix again, is yet to be determined.

Walker said he spoke with Musselman after the big announcement on Tuesday. His administration will work to find a way forward to support development for the Caelus project and others.

“We’ll sit down and listen to how the project would be impacted and what we can do given our financial situation,” Walker said.

Musselman said the cost of fully developing Smith Bay could be $10 billion.

But the state could see huge benefits from the expected boost in production, including collecting a 12.5 percent royalty share of oil produced.

At today’s oil prices, and with high shipping costs associated with an $800 million pipeline the company might build to tie into the trans-Alaska pipeline, the state could receive around $275 million a year in royalty income at peak production, said Ken Alper, director of the Department of Revenue’s Tax Division.

But startup would be expensive for Alaska under current law.

As an example, if $5 billion is spent before the field reaches production, the state would owe $1.75 billion under the 35-percent net operating loss credit, said Alper.

The benefit can be carried forward to future years.

Such a large bill could potentially offset Caelus’ taxes for years, even decades, Alper said.

He said the Slope net-operating-loss program did not contemplate such a major project. The program needs to be closely examined to determine if changes are appropriate.

Alper gave a presentation on Sept. 20 to the Alaska Oil and Gas Congress that said the credit should be reduced at least to 25 percent.

On Wednesday, Alper said no decision has been made on a reduction and other fiscal concepts the Walker administration could introduce to help close the deficit. 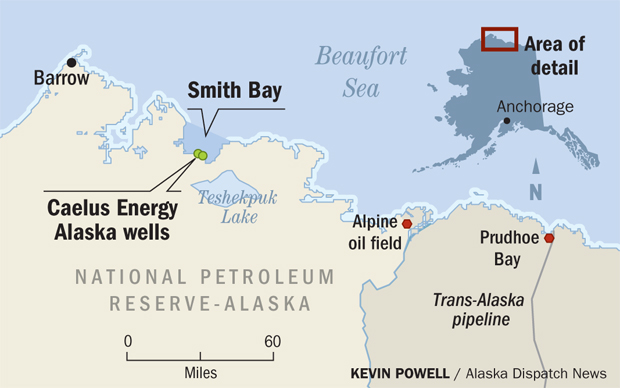 Planning for the Smith Bay project is in its early phases — two exploration wells were drilled this winter. An appraisal well to test oil-flow is planned for the winter season that begins in November 2017.

Caelus has not yet created a model of the long-term benefit to the state, Sullivan said. But whatever the cost of development turns out to be, the rewards will be much greater, he said.

Based on a cost-benefit analysis for a smaller Caelus project called Nuna, the state’s net benefit at Smith Bay would be in the many billions of dollars, he said.

The delay is the result of Walker’s decision this past summer to defer $430 million in tax credits to trim the state deficit, Caelus officials said.

Musselman said Caelus officials are planning to meet with organizations across the state over the next two months to discuss the project.

The state should receive a fair share of income for its oil, but it also needs to facilitate new projects to bring in money, he said.

It would ultimately help the Slope’s three large oil producers and damage the state’s long-term effort to diversify oil production, he said.

“They’re grinning like Cheshire cats because the governor is going to run us off and they’re going to be the recipients of those assets, and they’re not paying a dime more,” Musselman said of BP, ConocoPhillips and ExxonMobil.

Sullivan on Wednesday said Musselman supports both big and small oil companies, but may have been irritated because the proposed changes would hurt smaller companies.

“I think frustration is what you’re sensing,” Sullivan said. “We partner with legacy players, and we want a healthy industry for everyone.”

Sen. Bill Wielechowski, D-Anchorage, said while serving on the Senate Resources Committee he’s heard claims from other companies expecting to produce oil that have not yet done so, including during the last debate over taxes in 2013.

The companies claim they can’t proceed without tax benefits. But he said it’s important to remember that fields around the U.S. and in Alaska have been developed without such help.

“It’s great companies are exploring and we want to encourage that, but at the same time we have a state to manage and we have to be careful with our declining finances,” said Wielechowski, who has supported tax credits in the past.

“You have to just make sure they are genuinely needed and you are getting a fair return on them,” he said.