Epic by name, astounding by nature, the Arctic Circle is both figuratively – and literally – about as far off the map as destinations come. A pristine natural Eden of mighty mountain peaks, awesome glacial structures and pretty much every shade of blue known to man, this winter wonderland is often almost too beautiful to be true. Polar bears, whales, reindeers and walruses dot the ice-strewn land and seascapes, while wildflowers bloom on the inland plains, and, come the seasonal equinoxes, Aurora Borealis throws up its dazzling display of lights. Enchanting, stark and utterly removed from human civilisation, the Arctic really is ‘poles apart’ from the typical travel experience.

Due to the North Atlantic Stream, the climate in Norway is noticeably warmer than what might otherwise be expected. During the summer season, temperatures hover between 4C and 6C, which is a good 20C higher than what one would typically encounter at similar latitudes in Canada or Russia. Mid-May to mid-August is the best time to go, while October through to April are the coldest and rainiest months. The Northern Lights are visible from parts of Norway, with September to April usually presenting the optimal conditions for viewing.

The Svalbard region of the Arctic is a sparse and rugged landscape of craggy mountain peaks and gorges. Much of the land is covered under snow and ice year-round. The only kind of vegetation on the island is a brownish green moss that sprouts up in patches across the mountainsides, as well as some quite beautiful Arctic flowers that bloom during the year’s warmest months. 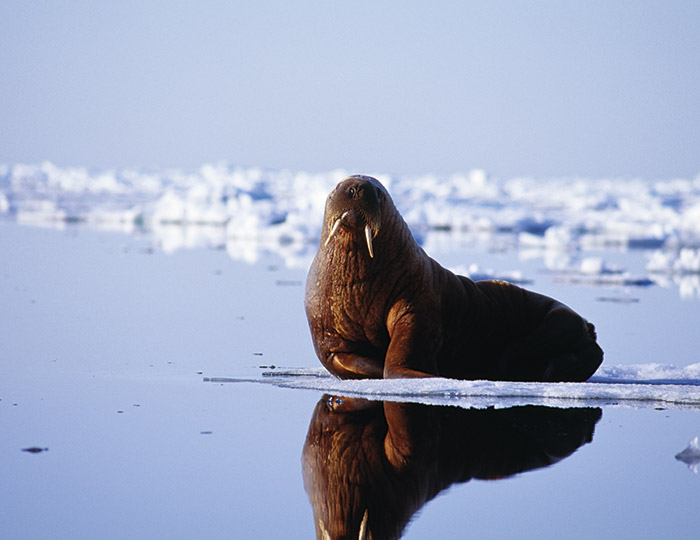 1. Polar Bear
The iconic symbol of Svalbard, the polar bear is not only the largest bear going around, it’s the world’s largest land carnivore. Some 500 polar bears are thought to inhabit the island at any one time. But don’t limit your spotting skills to land. As exceptionally good swimmers, polar bears spend more time at sea than on land, and have even been spotted paddling about in open seas 300 km from shore.

2. Arctic Fox
Spotting these fleet-footed puppies is thankfully easier during the summer months, when its snow-white fur turns to a dusty grey. Often living in a complex network of burrows, housing multiple generations, they have remarkable hearing that enables them to detect and dig through to prey scurrying about under the snow.

3. Sperm Whale
Despite having been hunted almost to extinction during the 18th and 19th centuries, these days sperm whales can often be spotted trawling the archipelago’s waters for their diet of fish and squid. The largest toothed whale in the world, it can grow to 18 metres in length, and possesses the largest brain in the mammalian kingdom. Because females and their young usually travel in pods of up to 20 whales, if you see one of them, you’re likely to see a lot of them.

4. Walrus
True blubber-boys of the animal kingdom, the Arctic’s walruses can weigh up to 1,700 kg, thanks to a six-inch layer of insulating tissue. Often spotted lolling about on the icebergs and rocky shores, they’re conspicuous by their sizeable tusks, which they use – icepick style – to help haul their blubber butts out of the water and over land.

5. Svalbard Reindeer
With a population currently pegged at approximately 10,000, this is the smallest subspecies of reindeer. Despite their slight size, these animals are highly mobile, often travelling up to 5,000 km in one year – the greatest known distance of any land mammal.