HELSINKI — The world’s longest undersea rail tunnel between Finland and Estonia could cost up to 20 billion euros ($24.7 billion) and be opened for traffic by 2040, a feasibility study by the two countries said on Wednesday.

Combined with a proposed rail link from Rovaniemi in Finland’s north, the tunnel would provide rail access from central Europe to the Arctic Ocean.

Following years of investigations, Helsinki and Tallinn are looking to build a permanent undersea link between the two northern capitals, situated on the opposite sides of the Gulf of Finland.

Tens of thousands of Estonians work in the Helsinki region, many of whom commute over the sea weekly, and many Finnish tourists visit Tallinn.

The proposed 103 km long tunnel would shorten the travel time between Helsinki and Tallinn to about 30 minutes, from at least 90 minutes currently by fast ferry. 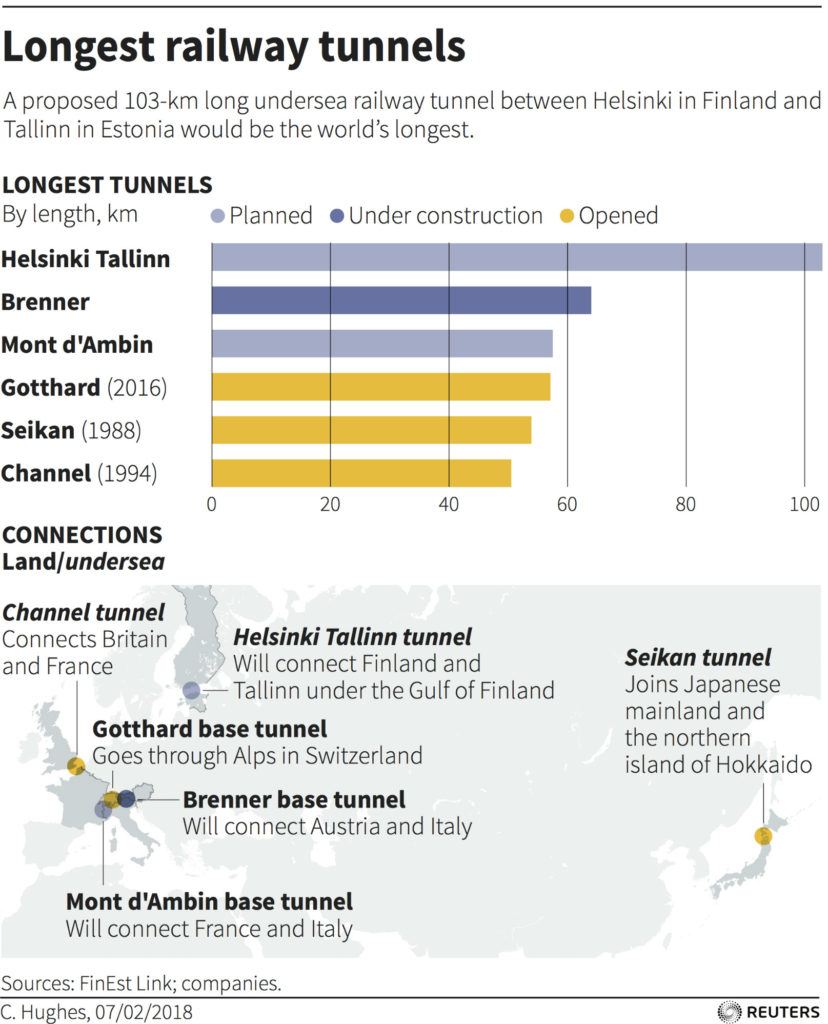 The tunnel would connect the cities’ airports and it would also link up with Rail Baltica, a railway connection between Tallinn and Warsaw, projected to be completed in 2026.

“Estonia will be connected to central Europe … and we must not stop here,” Estonian Prime Minister Juri Ratas said at a conference in Tallin.

“I have heard that many people in Finland … say that they feel like living on an island. But it does not have to be like that.”

Without the tunnel, passenger traffic between the cities is expected to grow from 9 million in 2017 to 14 million by 2050. With the tunnel, the traffic would grow to 23 million, of which 10 million would still be transported by ferries.

The feasibility study estimated the tunnel would cost 13-20 billion euros, hoping that 40 percent of the costs would come from the European Union.

A 2015 Helsinki report had a smaller price tag for the project, 9-13 billion euros.

The governments said they would evaluate the results in more detail during the spring.

A rival project, led by Angry Birds maker Rovio’s former executive Peter Vesterbacka, is seeking Chinese funding for a tunnel that would take a different route and open earlier than the governments’ plan.

The Finnish government, however, said it was focused on its own plan.

“We have one project … there will be room for innovation, but we have just one project,” said Anne Berner, Minister of Transport and Communications.