An oil explorer hoping to bring the Lower 48’s fracking revolution to Alaska will take a big step this week when it launches an effort to determine the production potential of crude oil locked in North Slope shale.

The process is expected to start Wednesday, when Accumulate Energy Alaska begins drilling an exploration well along the Dalton Highway about 40 miles south of Prudhoe Bay.

In June, it plans to hydraulically fracture that vertical well, using water, chemicals and sand to crack and hold open rock so oil flows from the shale. A production test to determine how the well oil flows is also expected this summer. 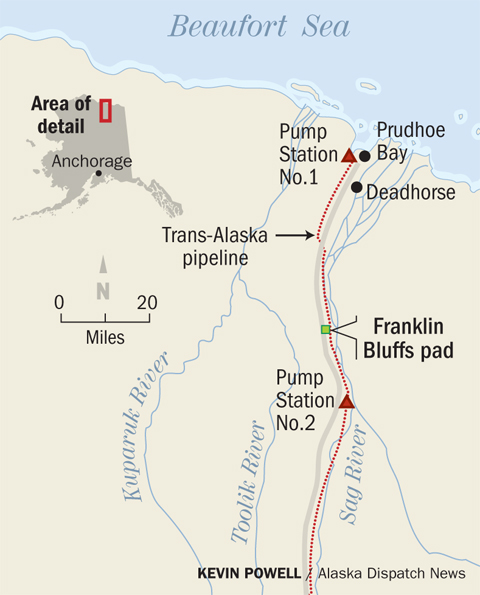 Paul Decker, a state petroleum geologist, said this will be the first test of its kind on the North Slope. Accumulate Energy will target residual oil and gas that never migrated out of rocks that are considered one of the sources for the crude oil at the giant Prudhoe Bay oil field.

Similar efforts, using long-distance horizontal wells and hydraulic fracturing, have sharply boosted oil and gas production from shale in Texas and other states. Alaska officials, facing a future of falling oil production and revenues, have waited years for a similar turnaround on the North Slope.

Sen. Bill Wielechowski, D-Anchorage, said he’s been hoping for unconventional shale production to take off in Alaska since exploration company Great Bear Petroleum told lawmakers about six years ago that shale oil could boost daily oil production by hundreds of thousands of barrels.

Great Bear, which holds large chunks of land, is now targeting more economic, conventional oil prospects at its leases. The company hopes those prospects can help foot the bill for the costlier shale-oil extraction that requires multiple wells.

“I’ve heard the potential is tremendous, but is it affordable?” Wielechowski said.

Accumulate Energy, based in Houston, Texas, hopes to find out, an official said. The company plans to drill the test well about 2 miles deep from the existing Franklin Bluffs gravel pad just off the highway.

Accumulate drilled an original exploration well off the pad more than a year ago, collecting core samples for testing. On April 6, Accumulate received a drilling permit for the upcoming test well from the Alaska Oil and Gas Conservation Commission.

After drilling that first well at Icewine, south of Deadhorse, the company, a subsidiary of an Australian independent, moved aggressively to broaden its stake in Alaska.

Accumulate and partner Burgundy Xploration, also of Houston, snatched up about 400,000 acres at a state lease sale in December. That increased the companies’ holdings to about 700,000 acres.

Burgundy Xploration’s chief executive is Paul Basinski, who helped discover the large Eagle Ford shale play in Texas. He told Alaska’s Energy Desk in March that the prospect’s name, Icewine, comes from his fondness for German ice wine, a sweet drink made from grapes that froze on the vine.

Erik Opstad, Accumulate Energy’s general manager in Alaska, said on Friday that good flow rates from a single exploration well won’t prove North Slope shale is commercially viable. A good test will lead to more analysis, including whether the flow rates are enough to overcome the high cost of development.

“You can’t make huge and grandiose statements based on one well, no matter the results. But if it’s positive, that’s perhaps more encouraging than not for Alaska,” he said.

“If they are successful, it will mean good things for our area as well,” Galvin said. “We wish them the best and hope for success.”

Mark Myers, former head of the U.S. Geological Survey and the Alaska Department of Natural Resources, said shale-oil production will require large amounts of water and sand for hydraulic fracturing. The costs of infrastructure, such as for new roads or new drilling pads, are some of the factors that will have to be weighed, along with the project’s environmental impact.

USGS assessments show lots of oil in North Slope shale, he said. Accumulate’s test can help determine whether the oil can be technically and economically produced.