For millennia, the North’s boreal forests have sucked carbon dioxide from the air, reducing the greenhouse gas layer enveloping the planet.

But now, as big fire seasons become more frequent in Alaska, Canada, Siberia and Scandinavia, scientists are warning that the vast forests might switch from being carbon sinks to carbon emitters.

At risk for release during wildfires is the old carbon that has accumulated in the ground below the trees, a more significant source of carbon than the burning threes themselves.

In study published in the journal Nature, scientists found that some of fires burning in the spruce-dominated forests of Canada’s Northwest Territories in 2014, released carbon that had been sequestered in the soil for hundreds of years.

Fire frequency strongly influences the fate of that underground “legacy carbon,” the study found. Areas of burning forest most likely to release old carbon were those that had previously burned within the prior 60 years, said the study.

When the time intervals between big fires are long, the layer of peat and other organic material at the forest floor’s surface is usually thick enough to protect the old carbon from flames, said Northern Arizona University postdoctoral researcher Xanthe Walker, the study’s lead author. “But if that interval is very short, that old carbon is closer to the surface,” she said. More frequent burning means less soil carbon will escape the fires, she said.

Warmer and drier conditions in themselves put legacy carbon at risk, Walker said.

“When you do get drought years and that soil dried out, deeper burning is a possibility, of course, and that would burn up that legacy carbon,” she said.

The 2014 fire season was the biggest on record for the Northwest Territories, with 8.4 million acres burned. But seasons like that are expected to be more common in the future. Big fire seasons have increased in frequency in northern boreal forests, and the trend is expected to continue as the climate continues to warm. 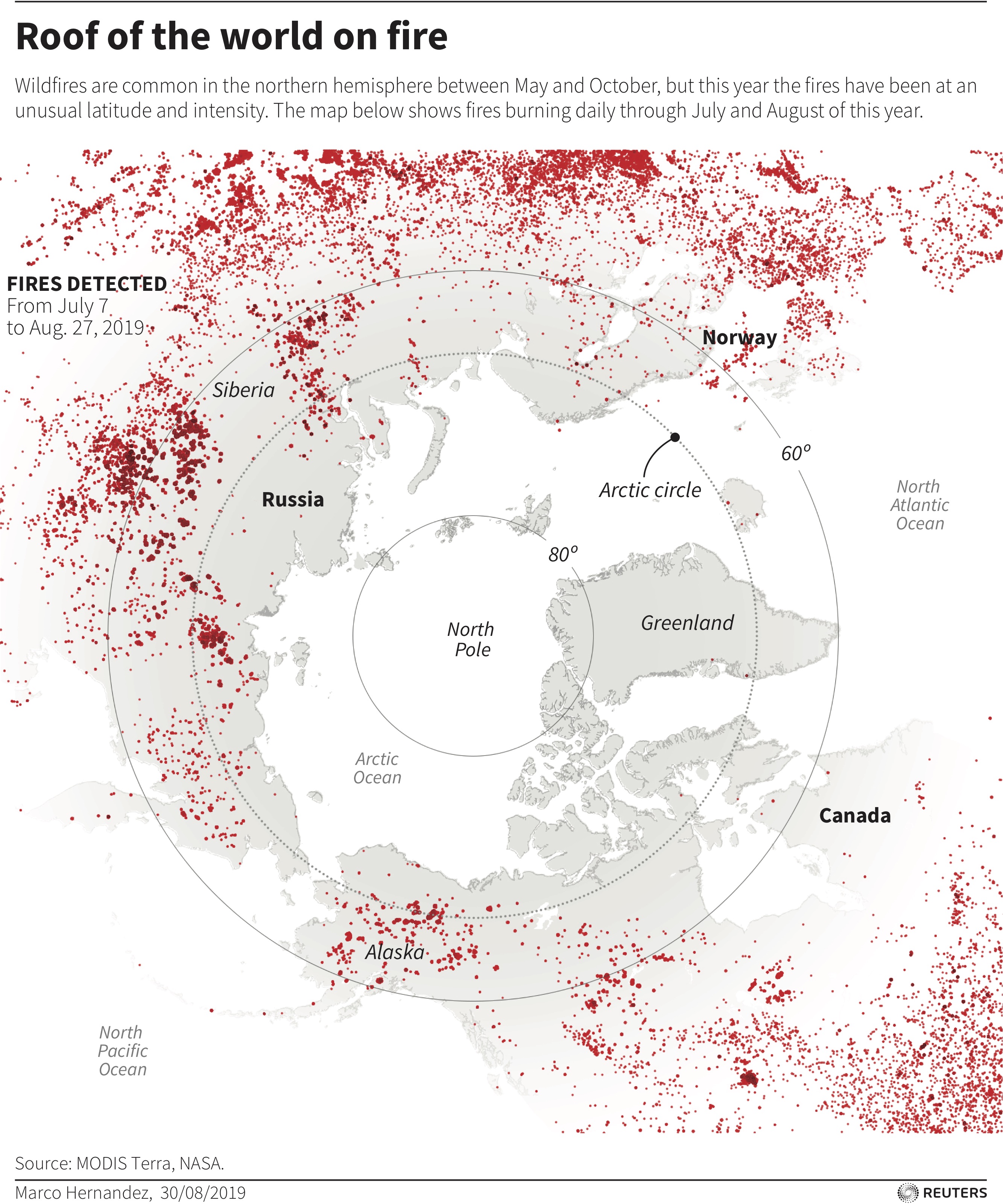 Boreal forests around the circumpolar North store 30 to 40 percent of the world’s land-based carbon, and vast majority of that carbon is stored within the soils. Increased frequency of severe fires could change those statistics, and do so soon, the study warned.

“Increasing fire severity, in combination with greater fire frequency and more burning of young stands, could drive deeper burning of organic soil and greater proportional combustion of organic-soil C. This could render legacy C vulnerable to combustion and shift boreal forests from a net carbon sink to a net carbon source over the fire cycle,” the study said.

Legacy carbon can be very old. Soil samples taken for this study put its age at 118 to 1,670 years.

In earlier work on the same project, the team found that the overwhelming majority of carbon burned in the 2014 Northwest Territories fires — nearly 90 percent — was in the soil’s organic layer rather than in the trees above the soil. In all, then fires are estimated to have emitted 95.3 teragrams of carbon, offsetting nearly half of the average amount of carbon absorbed each year by land ecosystems across Canada. Those findings are detailed in a study published last year in the journal Global Change Biology.

This year’s fires in Alaska and elsewhere in the far North have probably released legacy carbon, too, Walker said.

Thanks to extraordinarily hot and dry conditions over the summer, fires in southcentral Alaska have penetrated deep into the ground, according to fire managers. Ash pits have become a special danger, burning several firefighters and posing a hazard to residents returning to their homes after evacuation orders were lifted, according to fire managers.

Meanwhile, wildfires in northern Russia are approaching record levels, according to reports from Russia. The total amount burned in Siberia, mostly in the far eastern region, had reached over 13.3 million acres (5.4 million hectares) as of mid-August, according to the Siberian Times. 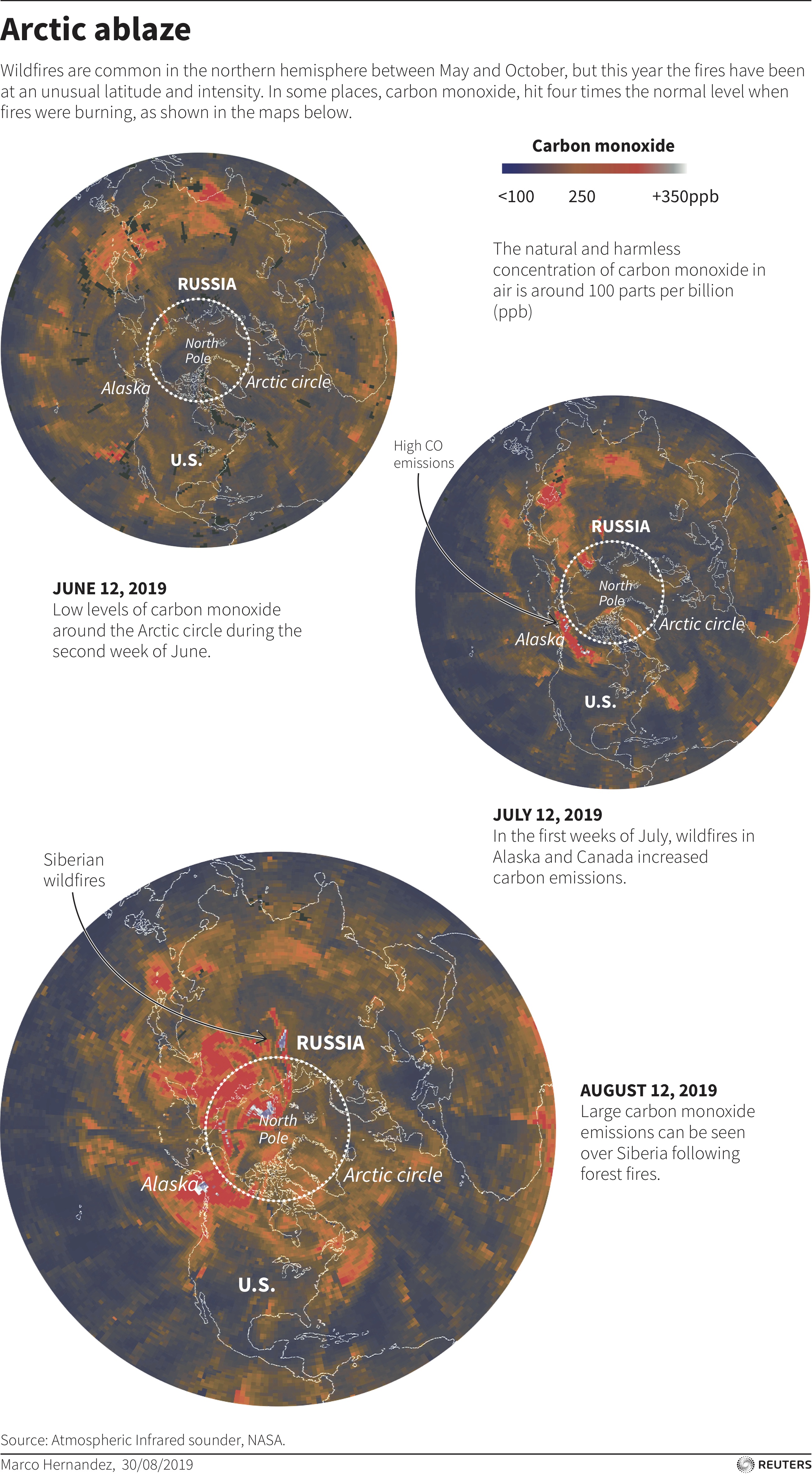 The changing mix of trees that follows wildfires will also affect the boreal forests’ ability to function as carbon sinks, other studies have found.

One new study published in the journal Nature Plants predicts that warming and warming-related wildfires will shift Alaska forests from being mostly evergreen to mostly deciduous. Dominance of leaf-bearing deciduous trees is expected to double by the end of the century, resulting in less storage of carbon in the ground, among other changes, said the study, by scientists from the Lawrence Berkeley National Laboratory and other institutions.

In interior Alaska specifically, wildfires and permafrost thaw will combine to shift the forest mix, with deciduous trees like quaking aspen replacing spruce at drier areas and at lower elevations, according to a separate study by scientists from Northern Arizona University, NASA, the University of Virginia, the National Center for Atmospheric Research and the Woods Hole Research Center, some of them the same who are studying the 2014 Northwest Territories fires.

That too will change the carbon cycle, though in complex ways, said the study, published in the journal Ecological Modelling.

Deciduous trees are less flammable than spruce and thus less likely to be burned in future wildfires, but deciduous forests also store less carbon in their soils, said the study, which is based on modeling.

“If the species are changing, you’re changing the entire carbon cycle,” said Walker, who did not work on that study but has followed her colleagues’ research.

The study did not consider the effect of insect infestations, but it noted that a large beetle infestation is currently underway in Southcentral Alaska, killing trees over a vast area and causing large amounts of carbon losses. The evidence is that the infestation is moving north, and it could alter the interior Alaska boreal forest, the study said.