Traffic through the icy region’s busiest lane along the Siberian coast increased 58 percent between 2016 and 2019. Last year, ships made 2,694 voyages on the Northern Sea Route, according to data collected by researchers from the Centre for High North Logistics at Norway’s Nord University.

The trade is driven by commodities producers — mainly in Russia, China and Canada — sending iron ore, oil, liquefied natural gas and other fuels through Arctic waters.

Even the COVID-19 pandemic, which has significantly slowed shipping worldwide as supply chains have been disrupted, has not prevented traffic increasing on the Arctic artery. Ships made 935 voyages in the first half of 2020, up to the end of June, compared with 855 in the same period last year, the data shows.

The increase in shipping is a worry for the environment. As those heavy ships burn fuel, they release climate-warming carbon dioxide as well as black carbon, or soot. That soot blankets nearby ice and snow, absorbing solar radiation rather than reflecting it back out of the atmosphere, which exacerbates warming in the region. 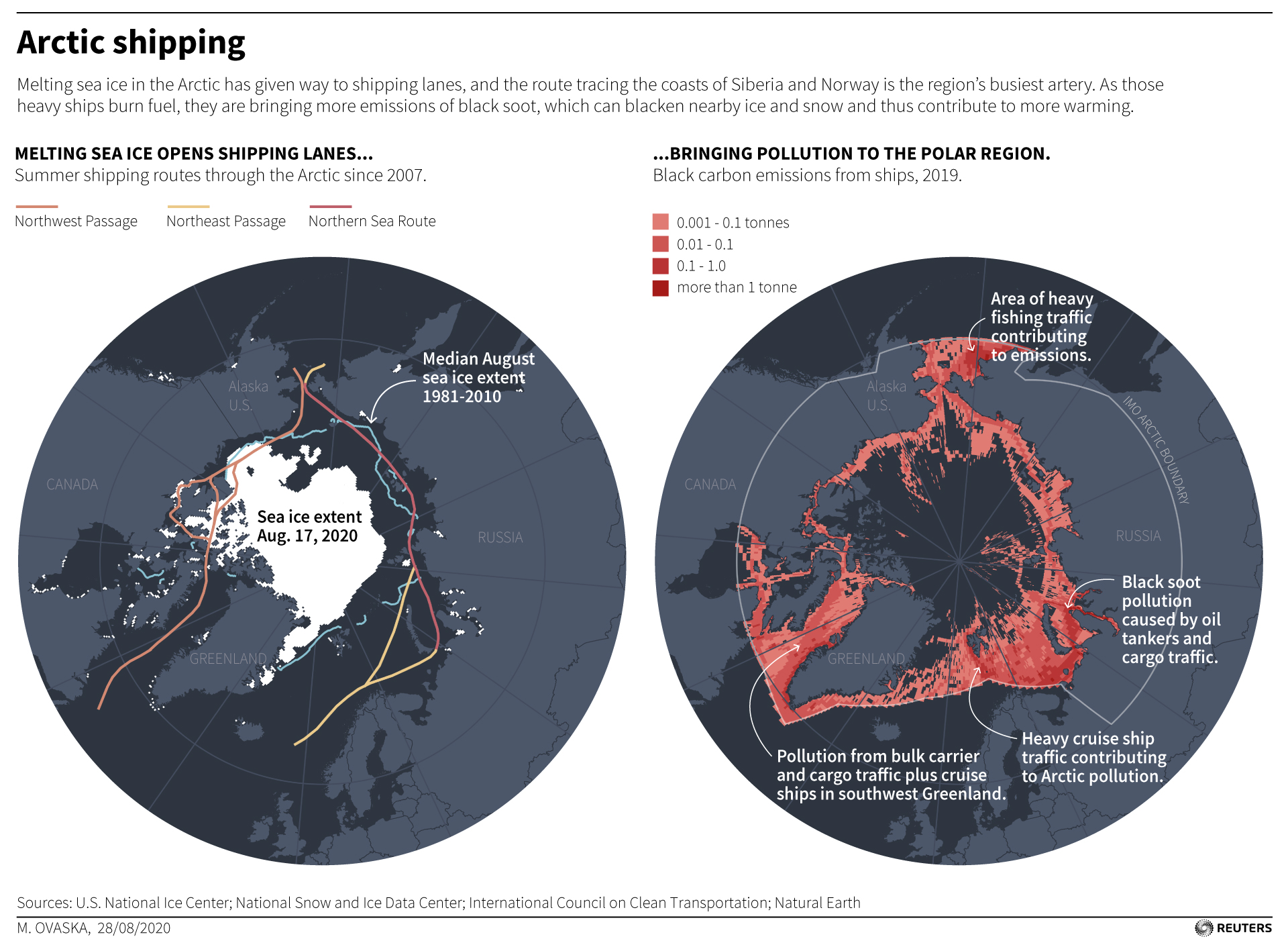 The Arctic has already warmed at least twice as fast as the rest of the world over the last three decades. With the region’s warming rate increasing in recent years, governments are gearing up for a future of open Arctic waters.

“The driving concern is the reduction of Arctic sea ice and the potential for more shipping,” said Sian Prior, lead adviser with the Clean Arctic Alliance. “We are already seeing that happen.”

LNG tankers make up the largest proportion of traffic on the Northern Sea Route. They alone burned 239,000 tonnes of fuel in 2019, versus only 6,000 tonnes in 2017, according to previously unpublished data collected by the non-profit International Council on Clean Transportation and shared with Reuters.

The Northern Sea Route, which traces the northern coast of Russia, is the region’s busiest artery. It allows cargo ships to save at least 10 days sailing between Europe and Asia, shipping specialists estimate.

That heatwave, which scientists have linked to climate change, had opened up the Northern Sea Route by the second half of July, marking the earliest complete thaw of that area yet recorded, scientists at the University of Colorado Boulder’s National Snow and Ice Data Center say.

As summertime heat shrinks the sea ice further, traffic is expected to become even heavier.

Last year, September was the region’s busiest month in terms of the number of ships navigating the route, with 34 vessels passing though compared with 29 in August, according to data from shipping intelligence platform MarineTraffic.

Traffic beyond the Northern Sea Route is also rising.

A total of 1,628 ships entered the Arctic region, outside that route, in 2019, up 25 percent from 2013, a study by the intergovernmental Arctic Council working group showed.

“We have seen constant growth (in shipping) over the last several years,” said Kjell Stokvik, managing director of the Centre for High North Logistics at Nord University. This trend will continue as long as there is demand for fuel and mineral cargoes across the global market, he added.

Russia in particular is driving trade through the region by developing energy and mineral projects in the Arctic, Stokvik said. President Vladimir Putin has set a target of transporting 80 million tonnes of cargo annually via the Northern Sea Route by 2025, more than twice what it ships today.

A tale of two poles

Also of concern for environmentalists is the risk of fuel spills in Arctic waters, where the harsh conditions make cleanup efforts especially challenging and spills could have devastating impacts on sensitive ecosystems.

The 1989 crude oil spill by the Exxon Valdez tanker off southern Alaska spread out for months over 1,300 miles (2,100 kilometers) of coastal wilderness, killing marine animals and plants throughout Prince William Sound.

The accident, considered one of the worst human-caused environmental disasters, led to new rules requiring double-hulled ships in the region.

But while Antarctic waters are protected by stringent regulations, including a ban on heavy-grade oil adopted in 2011 — despite no cargo moving through those turbulent southern waters — the rules for sailing the Arctic are far looser.

Waters at both poles are governed by the International Maritime Organization’s Polar Code, and ships are “encouraged” to avoid using or carrying heavy fuel oil in the Arctic.

The IMO is pushing for a full ban on both the use and carriage of heavy fuel oil through the Arctic by 2024. “The approach is to take action to mitigate any potential negative (environmental) impact,” an IMO spokeswoman told Reuters.

Environmentalists note, however, that the draft rules being negotiated by member states currently include a clause to exempt ships flagged to countries with Arctic coastlines while operating in those waters until 2029.

That exemption would end up applying to some of today’s most active Arctic shippers, including Russia and Canada. Such “big loopholes” would make the regulation “virtually meaningless,” said Prior, of the Clean Arctic Alliance.

“A significant amount — probably three-quarters or more — of the shipping currently using the Arctic will not need to apply the ban until July 1, 2029, if it remains as currently drafted,” Prior said.

When asked about whether such exceptions would undermine the proposed regulation, the IMO spokeswoman said: “These are decisions made by the member states following discussion in the relevant fora.”