Thousands of years of a diet with lots of animal fats and sparse carbohydrates left a mark on the DNA of Native people of the Far North, a genetic condition that slows the body’s ability to burn fat for energy.

Experts once thought the condition was rare, but new DNA testing of newborns has found that CPT1A Arctic variant, as it’s called, is common among Alaska’s indigenous residents. While not normally a problem, the condition can lead to serious health problems when a person doesn’t or can’t eat, especially when very young.

The genetic condition exists among Inuit people in North America, Greenland and Russia, affecting their metabolism. The characteristic is presumed to have provided advantages in the past, possibly by reducing the health risk of obesity and by increasing the body’s ability to insulate itself with fat.

But the gene poses a risk for people who fast for prolonged periods, because their bodies cannot produce needed glucose from fat. Consequences can be grave for infants who go without food longer than overnight, and for other young children who rely on others to give them food and cannot always speak up for themselves when they are ill and weakened. The older a person is, the longer he or she can safely fast, even with the condition, experts say.

The new DNA test, launched in July, found that about a quarter of Alaska Native newborns in the state have been found to hold both copies of the gene that carries the condition, according to results from the Alaska Department of Health and Social Services. Another 36 percent of Alaska Native newborns have a single copy of the gene; the CPT1A Arctic variant gene is recessive, so both copies are needed to produce the metabolic condition.

Earlier tests given to newborns analyzed the metabolic condition itself and were able to find only about 10 percent of the cases, said Sabra Anckner, a perinatal nurse consultant with the state Division of Health. Catching all of the cases is a big breakthrough, said Anckner, who coordinates newborn testing.

“For the kiddos that we do identify, it’s lifesaving,” she said.

The DNA test has been administered since July 1 as part of the routine battery of Alaska newborn screenings that target about 50 conditions. It is based on analysis of a blood drop placed on a card sent to the Northwest Regional Newborn Screening Program, an Oregon state-run lab that serves several Western states.

Though the condition is found almost exclusively among the Inuit groups — Inupiat and Yup’ik in Alaska — the test is given to all Alaska newborns, a policy considered to be more efficient and cost-effective than any attempt to parse out ethnicity.

From July 1 to Oct. 24, 244 Alaska infants were found to have the CPT1A Arctic variant. In the first six months of the year, when the old test was used, only 82 babies were identified, Anckner said.

The results of the new DNA screenings confirm what experts had begun to suspect about the CPT1A Arctic variant. For people of Inupiat and Yup’ik ancestry, “it’s kind of the normal thing to have,” said Matt Hirschfeld, medical director of maternal child health services at the Alaska Native Medical Center.

It concerns the gene that makes the enzyme carnitine palmitoyltransferase in the liver. That enzyme is used by the body to switch from burning glucose — the simplest sugar — to stored fatty acids, which are normally broken down in the metabolic process. Lack of the enzyme interrupts the switch, and people affected with the condition need to keep a steady intake of food and avoid fasting.

Prior to 2003, only a few dozen cases were known in the world — outside of northern indigenous populations — of what was called CPT1A deficiency. In those cases, the enzyme was completely or almost completely absent; the condition was considered a random genetic mutation.

Then came signs of a different condition in which the CPT1A function is present but low, a condition specific to Arctic indigenous populations with traditional diets heavy on marine-mammal meat. Cases of severely sick children spurred the discovery of the Arctic variant condition — and eventually the confirmation that it is a genetic trait of Inuit people in the farthest-north coastal regions of the world, along with a group of First Nations members in British Columbia.

When those affected go without food for prolonged periods, they weaken and sometimes tremble — the symptoms of low blood sugar.

“They get shaky, they get sleepy,” Hirschfeld said.

For adults, the problem is addressed easily with a quick snack.

“They snap out of it,” Hirschfeld said.

But for babies and young children, caregivers must monitor and intervene when food has been lacking for long periods. Hirschfeld, a pediatrician, and other health providers have been spreading information for years about how to prevent complications like seizures — caregivers should make sure the babies and children take in breast milk, formula or other glucose-containing liquids, by intravenous means if necessary, according to the advice. 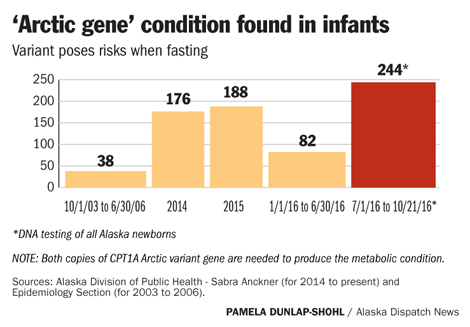 A correlation has now been documented between infant mortality and CPT1A Arctic variant. A study published earlier this year in the journal Genetics in Medicine was the most recent to make that link. The study compared cases of 110 Alaska Native infants who died between 2006 and 2010 to a control group, 395 babies born during the same period. Of those who died, 42 percent had both copies of the gene; in the control group, only 30 percent had both copies.

Children with CPT1A Arctic variant are probably no more likely than others to get sick, said co-author David Koeller, a pediatrician and geneticist at Oregon Health and Science University and one of the experts who shepherded in Alaska’s new CPT1A screening program.

Rather, it appears that they are more at risk once they do get sick, Koeller said.

“This just compounds the problem,” he said.

Children in rural area of the Far North, in general, are more vulnerable to respiratory infections. That is attributed to several factors — notably, crowded living conditions in small dwellings, deficiencies in water and sewer systems, and indoor air pollutants like smoke from wood-burning stoves. It is not just an Alaska problem. A new study published in the Canadian Medical Association Journal found that newborn babies in some parts of Arctic Canada have the world’s highest rates of serious lung infections.

Still, Alaska appears to be the only northern region that does routine CPT1A screenings for newborns, Koeller said. There have been pilot studies outside Alaska to try to understand the prevalence, but also some concerns in Canada and elsewhere that newborn screening will create a stigma for those children who test positive, he said.

If there is a stigma, it’s misplaced, Koeller and other experts say.

Despite possible dire consequences when ill children fail to eat for extended periods, nothing is wrong with those who carry the genetic trait, experts emphasize.

Just how the CPT1A Arctic variant gene came to be remains a mystery. Presumably, it provided some kind of advantage for populations living in the extreme conditions of the Arctic and subsisting on diets high in animal fats, Hirschfeld said.

If so, it would not be the only case of a genetic trait that evolved as a protective force but now poses some modern risks. Another example is the sickle cell trait, a gene that evolved in Africa. Carriers of a single sickle cell gene have some protection against malaria, but that quality is not useful outside malaria-infested areas and carriers have the risk of passing on sickle cell disease to their children.

To learn more about the subtleties of CPT1A Arctic variant, Hirschfeld, Koeller and Diana Redwood, an epidemiologist with the Alaska Native Tribal Health Consortium, hope to embark next year on a long-term study of children from birth to their toddler years. The study, which would be funded by the National Institutes of Health, is designed to track about 1,200 mother-baby pairs, monitoring lifestyle, health and intake of traditional and non-traditional foods.