On Tuesday, the Walker administration denied a proposal by ExxonMobil Corp. to expand oil production at the Point Thomson field, calling it “vague” and asserting the oil giant is not meeting the terms of a 2012 settlement that allowed it to keep operating there.

The rejection by Division of Oil and Gas Director Chantal Walsh comes after the state struggled for decades to force ExxonMobil to develop the field, located just west of the Arctic National Wildlife Refuge in northeast Alaska.

The six-page denial raises the specter of a courtroom battle if ExxonMobil challenges the decision, but also says the company can revise its expansion proposal to incorporate the state’s concerns.

The settlement followed a protracted legal battle in which the state sought to condemn ExxonMobil’s leases at Point Thomson for inactivity.

ExxonMobil is reviewing the decision. An official asserted the company is abiding by the settlement.

“ExxonMobil has been, and will continue to be, in full compliance with the Point Thomson settlement agreement,” said Hans Neidig, public and government affairs manager for ExxonMobil in Alaska.

The state and ExxonMobil have long butted heads over the field, formed as a unit in 1977.

In 2005 under Gov. Frank Murkowski, the state put the Point Thomson unit in default and later terminated the leases.

Those steps launched the court battle that led to the settlement. Under the deal, ExxonMobil brought the field into production in April 2016, a $4 billion effort with the state picking up about half the cost through tax subsidies.

The operation is complex. It involves the production of natural gas, and its reinjection back into the high-pressure reservoir some 2 miles below ground. During that “cycling” operation, ExxonMobil strips light oil, or condensate, from the gas mixture.

In a first step after the settlement, the state says ExxonMobil was required to produce at least 10,000 barrels of condensate oil daily, helping boost oil production in Alaska, which has dropped sharply since the late 1980s.

Walsh’s rejection says ExxonMobil has not met its production obligations. Average daily production has “fallen short” of 10,000 barrels, she says.

The field’s daily oil production through April was 3,000 barrels, according to figures from the Alaska Oil and Gas Conservation Commission.

ExxonMobil, which submitted its application in June, has told state officials production was impacted by design flaws associated with its gas-injection compressor. The company said repairs and maintenance caused oil production to decline or stop. 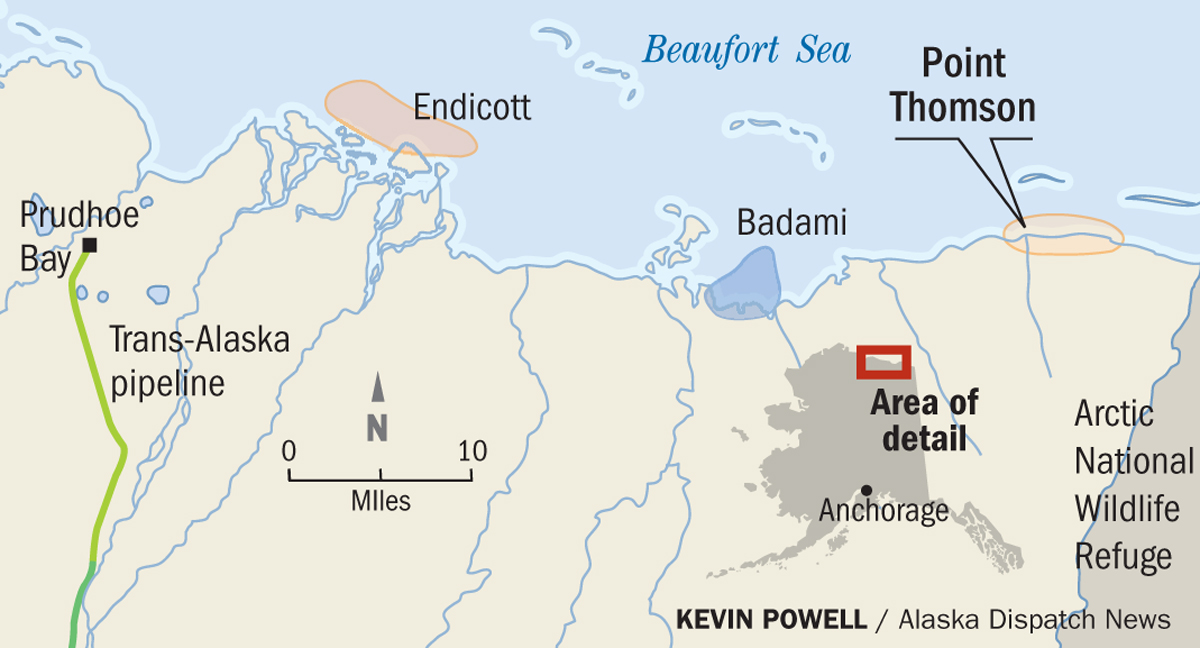 The state is concerned about the problems at the field, but sees Point Thomson oil production as valuable, the letter said. The state hopes ExxonMobil can “belatedly” achieve the 10,000-barrel requirement after refining its compressor system, she said.

Production has “so far been minimal and sporadic,” Walsh wrote. “Exxon’s explanation of difficulties with its compressor, however, suggest that it may have resolved many of those issues.”

To meet the settlement terms, the company had proposed boosting production to more than 50,000 barrels of condensate oil daily. It also proposed building a 60-mile, 32-inch line to ship gas to Prudhoe Bay. There, the gas would be injected underground and stored for future use.

If there is no expansion at Point Thomson, the oil giant could lose much of its acreage at the field.

ExxonMobil said its decision on whether to approve the expansion is a long way off — the end of 2019.

Walsh said ExxonMobil’s application “discussed” an expansion. But it also laid out a path that could allow it to simply “do nothing” to expand the field.

ExxonMobil’s proposal said it won’t conduct engineering and planning for the project unless its field partners, BP and ConocoPhillips, agree with ExxonMobil to pay for that work, Walsh said. The company says all three partners must also approve the gas-injection plan at Prudhoe Bay, Walsh said.

Those conditions, set by ExxonMobil, are “directly contrary” to the settlement, Walsh said. A plan of development needs to specify an operator’s plans, not work it might consider if certain events happen, she said.

The settlement says ExxonMobil’s proposal must call for the start of “engineering and permitting,” with “work plans for evaluation and selection of an option for development.”

“Instead, Exxon submitted a (plan) that vaguely refers to generalized categories of tasks and commits to completing none of them,” Walsh wrote. “This proposed (plan) would allow the (partners) to decide that they would rather not pay for planning, and then Exxon would perform no work.”

Under the plan, the partners could also reject the gas-injection plan, again leading to no expansion work, Walsh said.

The proposal is also “inconsistent” with the settlement because it lacks the required level of detail about permitting plans or new wells, she says.

“Overall, the proposed (plan of development) fails to paint even the most impressionistic picture of what Exxon will do over the next year and a half to engineer and permit an expansion project,” Walsh says. “It is thus inconsistent with the settlement agreement.”

ExxonMobil was supposed to conduct the planning work “starting now” and finish before 2020, as part of the settlement that let the company retain the unit, Walsh said.

If the company wants to challenge the denial, the state believes it must do so in Alaska Superior Court, Walsh says. ExxonMobil can also submit a revised expansion plan before Oct. 14 for the division to consider.