Before the coronavirus pandemic brought uncertainty to economies across the globe, sentiment was uneven over the future of the Arctic mining industry.

A survey from Fraser Institute, a Canadian think tank — conducted in 2019 but released in late February — found that Alaska and the Nordic countries continue to be among the world’s most favorable regions for mining investment, while the three Canadian Arctic jurisdictions (the Northwest Territories, Nunavut, and Yukon) are losing their appeal.

The Fraser Institute’s annual Survey of Mining Companies — in its 22nd year — is circulated to hundreds of global mining executives and investors and aims to measure the “mining investment attractiveness” of dozens of countries, regions, provinces, and states.he survey primarily assesses jurisdictions based on both mineral potential and on how friendly — or unfriendly — local government policies are towards the mining sector, called the Policy Perception Index (PPI). The study compiles 15 factors to build the metrics, which are aggregated up to an overall attractiveness score and accompanying global ranking.

How Arctic jurisdictions ranked in 2019

Finland remains the most attractive jurisdiction in the Arctic for investment (ranking second globally in this year’s survey index), followed by Alaska (fourth overall) and Sweden (10th).

In the European Arctic, Finland, Sweden, Norway (31), and Greenland (41) all climbed in the overall rankings. Meanwhile, Russia (ranked 27 in 2018) was not included in this year’s study due to insufficient data.

According to the survey, the industry’s perception of the Canadian Arctic, meanwhile, is tumbling. In fact, for the first time in a decade, no Canadian province or territory ranked in the top ten for overall investment attractiveness. Last year, Yukon (9) and NWT (10) were among the top ten jurisdictions in the world. This year, Yukon (23), Nunavut (26), and NWT (35) all fell in the rankings and their overall scores decreased nine to 18 percent from 2018. 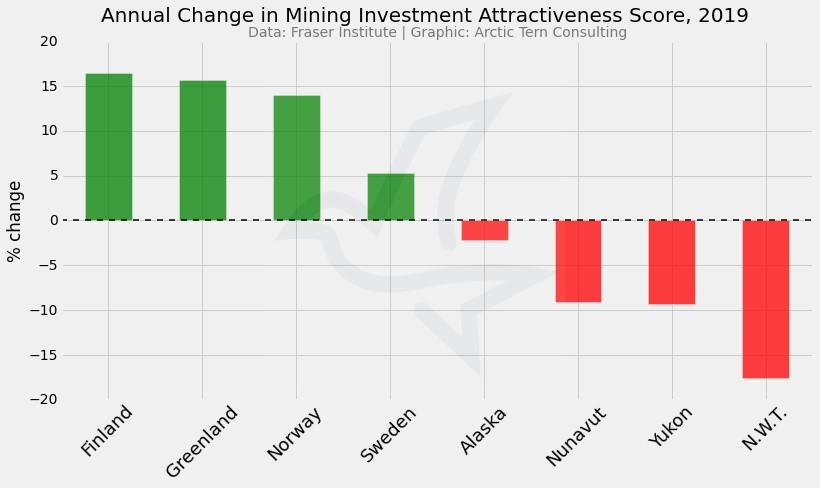 Of the eight Arctic jurisdictions included in the survey, Finland was found to be most attractive in terms of government policy as well as mineral potential.

In Alaska, investors increasingly saw government policy as a positive as well. In fact, while all other US states saw declines in their PPI scores this year, Alaska’s PPI ranking improved from 26th in the world in 2018 to 17th in 2019. Respondents cited decreased uncertainty concerning environmental regulations (-15 percent) and protected areas (-14 percent). 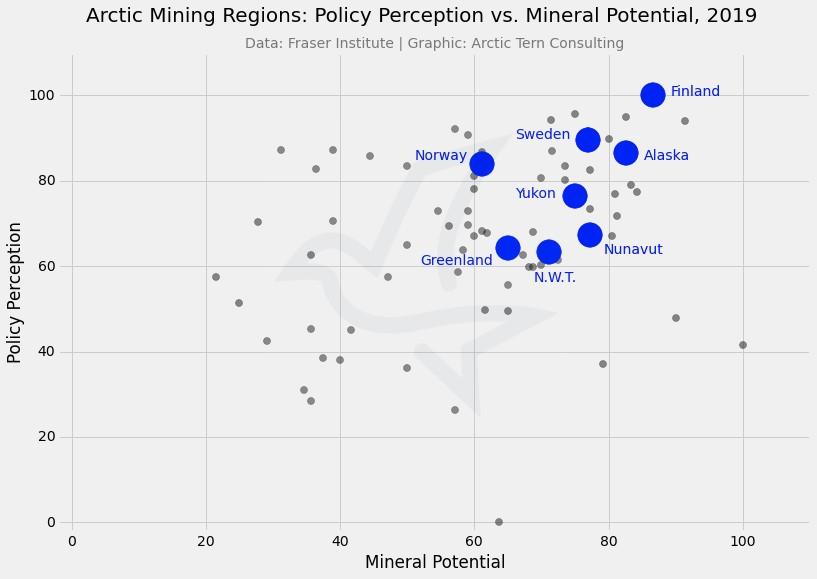 Meanwhile, the Canadian Arctic’s decrease in overall attractiveness was tied to increased policy uncertainty more so than an pessimistic view of the region’s mineral potential.

“A sound and predictable regulatory regime coupled with competitive fiscal policies is key to making a jurisdiction attractive in the eyes of mining investors,” according to Ashley Stedman, a senior policy analyst at the Fraser Institute and co-author of the report.

Speaking with High North News on the survey’s findings, Stedman noted that across the Canadian Arctic, mining investors increasingly view the regulatory regime as a deterrent to investing. Stedman noted an uptick in uncertainty regarding environmental regulations in the Canadian Arctic this year, with respondents specifically citing protected areas as a source of increasing concern and policy uncertainty across the three territories. Stedman noted that on a year-on-year basis, more respondents saw increased policy uncertainty over protected areas in Yukon (+11 percent), NWT (+13 percent), and Nunavut (+11 percent).

The Fraser Institute survey also highlights a disparity between Arctic regions in terms of available infrastructure.