The Umiat oil field, now with a new owner after the previous one went broke, remains as promising yet as challenging as ever, with hopes to tap it facing daunting problems by its 100-mile distance from the nearest supply road.

Even Umiat’s owner says the field will face “risks and challenges” never before encountered on the North Slope, or anywhere in the world for that matter. 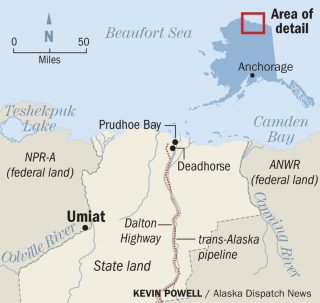 But Malamute Energy of Golden Valley, Minnesota, has one edge in developing the field that wouldn’t be apparent outside the industry — it’s got Corri Feige working for it.

Feige got to know Umiat from a previous job as general manager for the Alaska operation of Linc Energy, the Australian company that owned the field before. And between her time at Linc and Malamute, Feige oversaw petroleum activities in the state as director of the Department of Natural Resources’ Division of Oil and Gas.

Malamute took a step toward developing the Umiat prospect in July when it asked state and federal regulators to combine its leases there to form a single unit, following up on an application originally made by Linc. The leases are located on state land and in a southeast section of the federally owned, 23-million-acre National Petroleum Reserve in Alaska.

Malamute’s directors include Feige, one of five directors or officers listed on the company’s website. Malamute President Leonard Sojka said that Feige is also a consultant to the company.

Feige resigned as state oil and gas director in October. The resignation came one month before newly created Malamute Energy received authorization to do business in Alaska.

The Umiat field is believed to be rich with oil but remains undeveloped long after its discovery by the U.S. Navy in the 1940s. A big problem has been the field’s 100-mile distance from the Dalton Highway, forcing drillers to build winter-only roads made from compacted snow to support vehicles and drilling rigs.

Malamute Energy asked for field consolidation in applications filed July 17 to the Alaska Division of Oil and Gas, where Feige had worked, and the U.S. Bureau of Land Management. The July 17 application supplements an original one filed by Linc Energy in January 2016.

In late May 2016, five months after it sought to consolidate the Umiat field, Linc put its U.S. subsidiaries in bankruptcy amid low oil prices that have halted multiple Alaska projects.

Malamute’s application says challenges to development include remoteness, terrain, and the permanently frozen oil reservoir, along with the need to build major facilities such as a plant for minimally processing crude oil and a pipeline about 92 miles long to the trans-Alaska pipeline.

“Any proposed development at Umiat will face a number of risks and challenges that have not been encountered on the North Slope of Alaska or elsewhere,” the application says.

The effort could be worth the prize. Linc Energy has said potentially recoverable reserves could reach 200 million barrels. That’s a bit larger than Alaska’s entire oil production in 2016. Linc conducted exploratory drilling in 2013 and 2014.

David Houseknecht, project chief for the U.S. Geological Survey’s Energy Resources Program for Alaska, said the USGS in the 1980s pegged Umiat’s recoverable oil at 70 million barrels. He hasn’t seen the new data from Linc Energy to update the size of the oil reserves. But he said Umiat is large.

“It certainly has some size to it,” he said. “It would certainly be economically viable if it were closer to infrastructure. It’s one of those deals where you have to get a pipeline to it, and that really changes the price structure.”

“A succession of people have either tried to make a go of it, or invested in it and flipped it to someone else,” Houseknecht said.

Linc spent about $180 million acquiring the leases and exploring the field, Malamute’s application says. Malamute purchased a controlling interest in the project in November 2016, spending “an undisclosed but significant amount” to acquire the assets.

The company has been doing “routine work” to transfer documents and information from Linc as it analyzes data associated with the project, according to a recent email from Sojka, the Malamute president.

“Until we complete that work, and our analysis of the data, we will not be in a position to determine the next steps for the project,” Sojka said.

Sojka did not respond to questions about his personal biography, how he became involved in the project or the nature of his industry background.

Sojka described Feige as a consultant for Malamute Energy and a board member since December — two months after she left her state job.

The Alaska Executive Branch Ethics Act generally bars state officials from disclosing information not available to the general public and imposes a two-year moratorium on working on a matter in a private business that engaged the official when employed by the state.

In an email, Feige said that during her state employment, Beckham dealt with the project. Feige said she was required to withdraw from dealing with it herself.

“(Beckham) would have handled anything related to the Umiat Project while I was at DOG,” she said.

Sojka didn’t respond to a question about Feige’s compensation from Malamute.